Anwar must had really scared the Japanese

The Pakatan leadership had described the Japanese immigration authorities' decision not to allow DS Anwar Ibrahim into their country as a "national insult".

Lim Kit Siang, in a posting at his blog highlighted that,

- The Japanese Government should apologize as it was a most unfriendly and even hostile Japanese act against Malaysia.

- It tantamounts to disrespect and slap-in-the-face of the majority of voters in Malaysia as Anwar is the leader of the Pakatan Rakyat coalition which secured the majority support of 51% of the voters in the 13th General Elections on May 5 last year.

-  Japan is an international laughing stock because its government barred Anwar from entering the country.

Well, I think Kit Siang should also called on the 51 per cent Malaysian voters who support the Pakatan coalition to boycott everything Japanese.

No sushi for everyone until Anwar is once again allowed into the land of the rising sun.

Ya, Kit Siang is indeed becoming a little bit more senile these days. So ,Chinese drama about the whole thing.

If the Japanese government don't like Anwar to be in their country, that's their right to do so la.

It's their country okay. They are free to do what they like there. They can deny or allow anyone to enter their country because it's something like their house where it's up to them to allow someone to come in or kick out if they don't like his face. 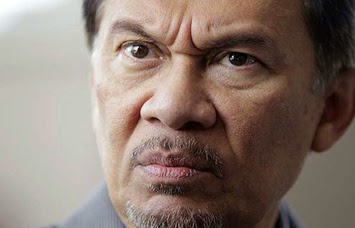 Well, after all it's probably because they now know something about Anwar that no one else knows.

Something which was definitely really horrid that they don't want him to be anywhere near their young men....or young women.

Well...at least Kit Siang in that posting didn't claim that the Malaysian government was responsible for getting the Japanese to stop the sexy Anwar from entering their country.

Anwar and gang had earlier been reported by the world media as accusing the Malaysian government as being responsible for him being denied entry into Japan. To read those reports, you just google "anwar ibrahim japan".

I think Kit Siang had by now know that it was not the Malaysian government's doing and don't want to be embarrassed when the real reason for the Japanese authorities' decision being made known to the public..

But really, I'm quite curious to find out why the Japanese did that too.

I honestly don't think it's about Anwar having been charged with committing same sex rape.

The Japanese are known to be quite open minded about sex and I don't think a man in his late 60's, despite allegedly being a sex maniac with a crooked penis who  goes after both boys and girls, would scare them one bit.

Unless, of course the Japanese know something really nasty about Anwar....I mean, more nasty than what we suspected of him la.

The Japanese are a bunch of super efficient people and they don't simply do these things without a reason or because they feel like being morons by making decision based on false reports by the Malaysian government about Anwar as alleged by the Pakatan people.

They must have instead checked and found something so shocking that they decided  they don't want someone like Anwar to be in their midst or even set his foot in their country.

Who knows, maybe it got something to do with what he had done during his earlier visits to Japan before this.

I had once talked with a friend who is a high ranking police officer and he said that he used to escort Anwar when he was the deputy prime minister.

He told me that Anwar really love going to Japan since back then.

And you wouldn't believe the places he visited when he was there, he said.

My friend however refused to elaborate.