So, handsome boy Guan Eng has a new car and a lot of people are jealous of him.

So much hue and cry.

Poor boy had to defend himself and the car.

These were his defense,

1. The Mercedes was purchased after a state executive council meeting, that took into account safety and security of state leaders.


2. The car was worth the money for long-term purchase.

3. It belongs to the state and will likely serve the next chief minister.

4. A Mercedes' maintenance in the long run was better than a Proton.


5. It was exempted from tax and was given a special discount.

6. The state executive councillors had initially wanted to replace their old Proton Perdanas with Mercedes cars instead  of Toyota Camrys.

and judge for yourselves whether his defense holds water or just a damage control exercise.

My conclusions from Guan Eng's excuses,

1. You want to be safe on the road, buy Mercedes Benz

3. Next Penang CM likely be driven around in Mercedes Benz too.

4. A Mercedes Benz is cheaper to own than Proton.

5. Companies which sell Mercedes Benz are keen to give (special discounts with no strings attached).

Actually, I don't agree that a Chief Minister should have to defend himself and his car like that.

Guan Eng should just ignore the hue and cry.

I don't think he has anything to fear because no matter what he does, he will still have the support of the Chinese community.

In fact, even if the Penang government had bought him a Rolls Royce, Guan Eng should not fear losing the over 90 per cent Chinese community's support that DAP won in GE13.

After all he needs a car to match all those taikors who sponsored his party's campaign in Penang in the run up to GE13.
He is untouchable.

He may even paint the Mercedes Benz the colors of Rainbow and will still get the undying majority support of the Chinese community. 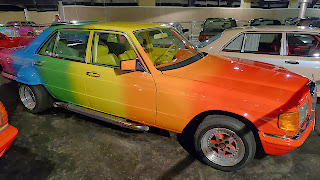 If the likes of Anwar  Ibrahim and Mustapa Ali can get away with almost anything, why not Guan Eng, isn't it?

Anyway, are you still flying economy class Guan Eng?
Posted by Annie at 18:34