This is my friend and me via Line last night, 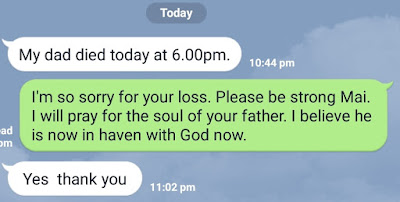 My friend is the masseuse from Thailand whom I wrote about in this post,

She has a nine year old daughter back home and she is also supporting her elderly father.We mostly talked about that as she massage me.How's Aom doing at school? Is your father well? That sort of things.

I was in the East Coast early last week when she told me that she was rushing back home to Thailand because her father's condition took a sudden bad turn.

Her father was 87 years old and wheelchair-bound.

She used to work in South Korea but switched to Malaysia after her father got really sick a few years back.She needed to be nearer to home because of her father's condition, she said.She wished she could go back to Thailand altogether but has to instead continue working here as she needs the extra money to fulfill her responsibilities.I actually admire her for being such a strong woman.
Whatever it is, I'm glad that she managed to be there for her father till the end.

I really hope that she'll be alright because I know that she loves her father very much.

Her father raised her by himself because her mother died when she was about four-years-old.

It was actually quite heart breaking to think that in his old age, his daughter has to work abroad as a masseuse to support the family.

He was a paddy farmer.

Despite all the talks about how advanced the Thai paddy industry is, its farmers are still not doing very well.

I actually learnt from my friend that life is still tough for her family and most other farmers in her country.

Actually after listening to her, I think our paddy farmers in Malaysia are generally doing better with the help from the government all these years.

But of course these days


Hopefully the government is doing the right things and things will not be too bad for them.

I actually miss my mother very much after receiving news from my friend last night.

Not unlike my friend, my mom is now taking care of my grandparents.

It's not easy taking care of elderly people.

My mom also got sickly herself sometimes these days.

I pray that my mom, grandma and grandpa are okay.

Here's a song for today;