Anwar's relevancy and about garbage in UiTM

Looks like Anwar is beginning to feel the heat ever since initiating the PD Move.

Anwar rubbishes views
he is no longer relevant

The Prime Minister-in-waiting,  who is 71 now, said the 11 years he spent behind bars had made him a person who truly understood the people’s problems, specifically of those in the lower income group and that this would serve him in good stead when he became the nation’s leader.“There are cynical views that I am already old and no longer relevant to get back into government,” he said at the “Pidato Malaysia Baharu: Mengisi Harapan Rakyat” event at the Putrajaya International Convention Centre here tonight.

Well, looks like someone will make a better PM if he/she had spent time in jail....according to Anwar lah.

Hmmm....maybe Najib should take comfort in that. If he goes to jail over whatever they are now throwing at him, upon his release, he could become PM again and be a better one.....even if at that time he's already 71 years old.

Guan Eng should be hopeful as he had spent time in jail at one point....and so do many criminals too.

Anyway, I think Anwar is beginning to realise that he is no longer as popular as he used to be and the PD Move could actually backfires.

And then there's the fact that


PKR factions are at each


Whatever it is, I think Anwar should just gracefully retire.

His insistence to become PM is becoming a bit embarrassing....I think even for many in PH.

I don't think someone past 70 and with such a chequered history should lead the Malaysia Baru.

I'm more in favour of the relatively young Azmin taking over from Dr Mahathir should the handsome old man really does stepped down in mid-term as promised.

Better still if Dr Mahathir stays on till the end of his days.

Ya, he's two decades older than Anwar but Dr Mahathir is of a different class altogether.

Anwar is definitely not of the same level as Dr Mahathir.

Another good thing if Dr Mahathir stays as PM till the end is that we can avoid having to go through another round of him trying to topple his successors such as Pak Lah and Najib.

Just imagine, later on, after he stepped down and Anwar becomes PM, we start to hear Dr Mahathir being unhappy again and wants to topple him too.

After all, I don't believe that Anwar is any better than Pak Lah or even Najib.

However, I think the risk of another such a campaign is less though if it's Azmin and not Anwar being the one taking over from Dr Mahathir.

Well, at least that's how I see it.

On a completely different matter, I took this picture earlier today while waiting for my cousin at the Mawar hostel of UiTM, Shah Alam, 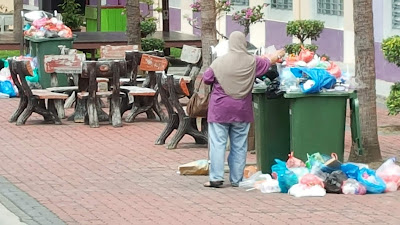 This is right in front of the girls' hostel.

My cousin, who stays there said the garbage had not been collected for quite a few days.

Maybe it's because of the long weekend, but that should not be an excuse.

They should come up with a better system for it.

I really think that the UiTM administrators should not let this happen again.

A campus of an institute of higher learning should not look like a slum area with garbage strewn all over the place like that no matter what.

It may also make the students think that things such as having garbage all over the place where they live are normal.

Hopefully they take note of this and not let it happen again.
Posted by Annie at 17:15