A wedding, and chances of Johor Umno's revival 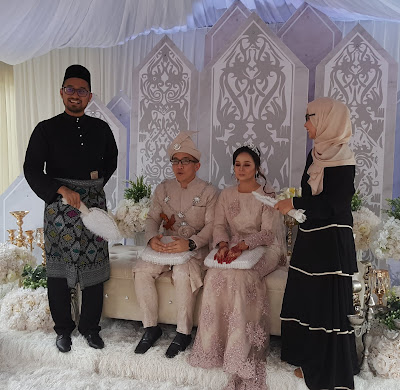 Very nice to meet some of the old gang from the pre-GE13 Johor there.

Seeing them reminded me of those good days back then.

I didn't get to talk much with them though, as everyone were there with their family.

But it was still nice.

For one thing, I know that none of my old gang have switched sides.

Even the few whom I knew had given up on Umno preferred to be neutral rather than joining the PH camp.

Most of them still wanted to help with the revival of Johor Umno.

Personally, I think the possibility of Johor Umno getting back on its feet is quite good.

It's new chief Datuk Hasni Mohammad has turned out to be better than I expected.

Definitely much better than Khaled Nordin.

I was at first sceptical of Hasni as he is one of the strongest supporter of TS Muhyiddin Yassin in Johor when the latter was the Umno deputy president, but he turned out quite okay....so far.

At least he's quite receptive to new ideas and willing to accept help from others including members of my old gang who were hounded out of Johor by the Khaled gang back in 2013.

I heard he's already doing quite a few right things.

Unlike Khaled, I know that Hasni is not surrounded by "advisers" who insulated him from knowing about the realities around him.

It's also good that Khaled and his irritating boys were no longer around for much in Johor and the fact that many of the old war lords among the division chiefs had been replaced by younger ones may helps a lot.

On the ground, I believe support for Umno in Johor will return if the party could do the right things.

What ever it is, I believe that Johor Umno on its own has a better chance to bounce back from the GE14 defeat compared to the party at national level.

Well, I heard things were quite fucked up at the party headquarters in KL these days.

That's why good people like Tok Pa and Anifah Aman left the party.

But I rather not elaborate on it.

If he fails to do so, then this would probably how many Umno members will react soon,