Eh, what is this la


So bad is it that


Well, there was this excuse

but I think it's just them being plain screwed up.

If I'm not mistaken, there were also fracas during previous PKR elections back then even before the party gained power.

After all, there's that Rafizi versus Azmin fight. So much at stake, I guess.

As I wrote previously, it's actually a

So, maybe that's why they ended up throwing chairs at each other and stuff. 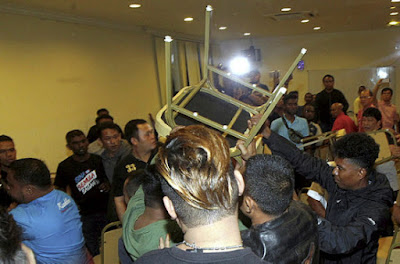 I believe it's going to just get worse later on when the results come out.

Well, never mind. None of my business, actually.

Just surprised that I was actually right on the part about them not being any better than Umno and its BN gang once they are in power....maybe even worse.

Yup, that's the Pakatan party with the most number of seats in Parliament.

Maybe that's why they started to throw those chairs around. They have too many of them.
Posted by Annie at 11:58