Italiano better than Malay and probably a very quiet PAU

In my last post, my friend Gondrong wrote about

Who cares about the Malay language

He seemed so concerned about the Malays and their language

However,  I cautioned that,

Anyway, being Malay is associated with being very negative these days.So backward. So corrupted. So Umno.

True enough, these are some of the comments for Gondrong,

That's for Gondrong, because he wrote about Bahasa Melayu or Bahasa Malaysia which is the national language.
Yup, frog under the coconut shell, uneducated, backward kampung folk, don't know the world.
There are actually other comments which were even more rude and condescending.
That's why I warned of the consequences for those wishing to talk about their Malay race,
Malays who don't want to be labelled or cursed as such better not talk about their Malayness.
Melayu...the most bangsat race in the world....they don't say it like that, but that's surely what they meant.
Better be French or Swiss or something else....or Japanese...Japanese are the best, okay.

As for the part of my previous post where I wrote about
Najib chit chatting with Chinese ladies
these are some of the comments for me,
Anonymous27 September 2018 at 12:47
hahaha,...annie! confirmed u r org kuat najibrosmah...our deepest sympathies...
Anonymous27 September 2018 at 13:29
Just give it up lah Annie. Ameno, Pokjib, Badak cannot be saved. It's the end of an era...a very corrupt era.
Well, I guess these days no one can write about Najib unless it was meant only to curse him.
If I just wrote Najib was seen eating ice cream or Najib was seen chit chatting with a turtle, I'll be labelled makan dedak, supporting corruption, etc.
I must write Najib the most evil person who had been CONFIRMED to be a thief, stealing billions of ringgit from the rakyat. Nothing else.
Yup, that's the only theme they want to hear when it comes to Najib.
Guess, they need to keep up with the campaign strategy.
Don't know lah....I thought now the election is over, it's alright if I write like that.
Never mind.

Oh by the way, I almost completely miss this one - Umno general assembly starts this evening.
There's apparently very minimal news coverage on it.
Guess the media people don't care that much about Umno now that it's no longer in power.
Probably no more big time editors falling over each other to pose for pre-PAU photos like this, 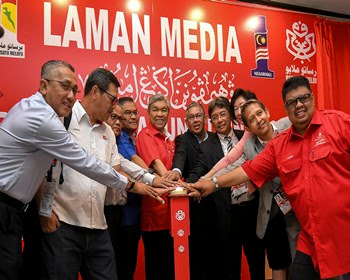 Hehehe....somehow I always laugh when I see this picture.
Okay, I know la, they just want to survive.
Fine.
I also hardly write about Umno these days.
Honestly, I find it hard to do so after the disappointing party election and appointments of office bearers after the party's GE14 defeat.
Well, maybe there's something they can work on at the general assembly.
But that's up to them.
If they just want to go around with the same bullshitting rhetoric as usual, then that's also fine with me.
I don't really give a shit. I'm not even a party member, okay.
In case you want to read more on this, please click on this link to a quite good commentry,

Umno has its work cut out,

especially with leaders on different pages


Me, I need to go to the toilet now....so I'm ending this posting here.
Here, enjoy this song for the day.
Yup, even Italiano is better than Malay, right.
Ciao.
Posted by Annie at 10:21