Shut down almost everything and resting.

But earlier this morning I woke up and saw this, which was sent to me by a friend last night,

I was hoping for someone better.

Shahrir is about as old as Isa, okay. Almost 70.

Does Shahrir knows how to fix Felda?

Well, I do wonder because his JB constituency doesn't even have a Felda settlement.

As for his track record, you all may have a look at it yourself at this link,


I'm not saying the guy is bad, but do you all honestly remember anything significant that he did when he was a minister three times in his career?

As for Isa, he would probably claim that his 22 years as Negeri Sembilan MB was memorable.

Actually, I think the only significant achievement of Shahrir is that he managed to build a reputation of himself as being someone with integrity, honest, clean, etc.

Okay, he also made a name for himself by whacking Tun Dr Mahathir Mohamad throughout his career. At least the guy is consistent on that count.

But were that good enough for him to make things better as far as Felda is concerned?

Really, I'm not sure.

Well, whatever it is, good luck to Shahrir.

Oh, I'm also wondering what is going to happen to his JB parliamentary seat in the next general election.

And I think I read somewhere quite a while ago that he said he will not defend his JB seat.

Honestly, I think without Shahrir there, BN may find it very difficult to defend it.

Maybe I'm wrong, but I can't see anyone from the JB Umno division who can pull it off.

Maybe the Umno leadership should think out of the box over the matter.

If it's up to me, I would like to field someone with a reputation as good as Shahrir's or even better.

After all, the JB people have all these while prided themselves as being special as they have mister integrity Shahrir as their MP.

So, because of that, I think the best person to take over Shahrir's JB seat is this JB guy, 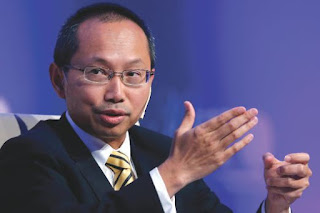 
is my choice as BN's parliamentary candidate for JB in the next general election.

I really think the guy is good.

Okay, I can already hear the protestation of the JB Umno division people, but seriously guys, don't you think you all need someone good like Wahid to replace Shahrir?

Do you all rather lose the seat by fielding someone lesser?

For all you know, Wahid may not even want to take the risk of contesting the seat. He's probably already comfortable being the PNB boss.

But still, if I'm PM DS Najib Razak, I would call the guy up and tell him that he needs to do it for the sake of agama, bangsa and tanahair.

I think Najib needs all the good Umno guys like Wahid to be around him now and especially for the coming general election.

Amokh, you vote or not?