A crazy doctor biker and chess matches with uncle

Was yesterday riding north with my friend, the doctor I featured in this post

This is his bike, a Yamaha R25 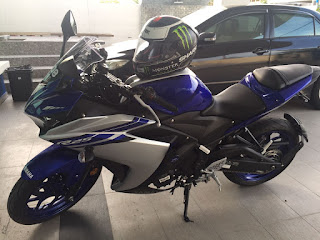 It's his first bike.

The crazy guy just woke up one day and decided to be a biker and bought the bike.

He never really ever rode a motorcycle before.

I scolded him when he told me about it.

"Why you want to risk riding a bike? You never even rode a kapchai before. Are you crazy?" I ranted at him.

"I want to be cool la," he replied like an idiot.

Really didn't know what to say.

The guy is actually cool enough already, saving lives on daily basis as a surgeon.

But it's done already.

He is now a biker, risking life and limbs on the road.

Well, at least he has the common sense to get a small bike first.

Mine is small too but I got more riding experience than him.

Actually I wanted to visit my uncle and he wanted to tag along.

My uncle is the one with a disability I featured in this post,


He was very happy seeing the two of us.

It's been quite a while since I last saw him being so cheerful.

My uncle was actually very close with the doctor.

They were childhood buddies.

We had lunch together and chatted for quite a while.

The doctor brought a chess set for my uncle.

As I previously wrote, my uncle was a very good chess player before he was afflicted with his current ailment.

The two of them played a round.

From the few opening moves, I knew my uncle was going to win.

True enough, in the end he forced the doctor to make a fatal error and won the game.

Then it was my turn.

I'm quite a good chess player myself. Almost as good as my uncle.

I think I played quite well, giving my best against him.

At one point I managed to corner his king and almost caught it, but in a brilliant sacrificial move, he counter attacked and trapped my queen, forcing me to admit defeat.

If you all know the actual ailment of my uncle, you would not have believe that he managed to beat me and the doctor, who is a neurosurgeon at chess.

It was very pleasant though, knowing that my uncle can still play chess so well.

I always miss his old self.

Hopefully his condition stablise one day and he can live a normal life again.

The doctor is going south.

Will remind him to berhati-hati dijalanraya.

He really should just drive his sports car.

Much safer fun that one, okay.