Saw this story just now which made me laughed but also in a way dampened my CNY mood quite a bit,

Tengku, 3 others charged for rioting at condominium

I guess this is the nasi lemak seller, 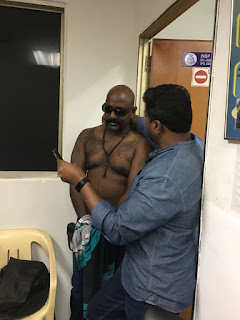 I don't think I want to buy nasi lemak from the guy.

He looks too scary lah.

And the whole gang are out on bail now....and probably back selling nasi lemak again.

As for the charge of rioting, it's under Section 147 of the Penal Code which carries a maximum punishment of two years jail and fine.

That's maximum, okay. They probably will get less than that if any.

So, remember, that's the penalty of beating someone half to death.

I wonder why can't they at least be charged under Section 325 of Penal Code for causing grievous hurt which maximum penalty is seven years jail and fine.

The lorry driver looked quite grievously hurt to me.

You can watch the video of the beating and what I found out about the assailants at my previous post,

The real people who beat up the lorry driver

That's how things are.