I'm back in Kluang at my mother's family home.

Spent the whole of yesterday doing spring cleaning with my mom and grandmother for the Chinese New Year celebrations this weekend.

My grandmother seemed to be recovering well from her recent ailment and despite us telling her not to tire herself, insisted on joining us in cleaning up the house.

My grandfather however is mostly still weak from his own illness, suffered last month. He spent most of his time resting. My mom constantly worried about him because my grandfather, who previously was a boisterous person,  doesn't talks much anymore.

My mom has taken a long leave from her job to look after my grandparents. It's probably the longest leave she ever took from her job.

Anyway, the rest of the family will start arriving home later today.

Big auntie and small auntie, along with my favourite cousins will arrive from Singapore tomorrow.

As always, it's going to be fun.

Yesterday evening, I went to town with my mom to buy the usual home decorative items for the occasion. 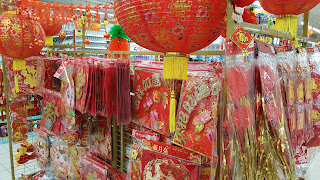 It's always my mom who choose the decorations as she's a bit of a Chinese scholar, being the only one in the family who had studied in a university in Taiwan.

Around this time of the year, I normally try to avoid writing about politics but today can't help but to notice this BigDog's posting,

which highlights concerns of Deputy Prime Minister DS Ahmad Zahid Hamidi over studies which indicate that :

- only 6.6 per cent of the country’s cybertroopers are supportive of BN, while the rest are anti-establishment.

- for every pro-BN cybertrooper, there are 15 others who are working against the government.

Well, I don't know what to say about it anymore lah.

I have been bitching about the poor coordination of BN/Umno cyberwar and media efforts for the longest of time.

If you all have the time, check the archive of this blog to find my posts where I whack Umno/ BN cyberwar and media bosses.

Sorry, I'm too lazy now to find them for you.

Well, of course all I got for all those posts was being branded as not being supportive enough of the establishment and such.

I was even labelled a trojan horse and paid DAP cybertrooper at one point.

Anyway, I did come across instances of BN losing its supporters in cyberspace.

This is one case where a couple who used to support BN in cyberspace without being paid to do so may have stopped doing that after what happened to them,

Now that the general election is drawing nearer, it's going to be quite a struggle for BN to catch up with the opposition in cyberspace.

Even Ip Man asked to fight against only 10.


Hahaha...actually that Ip Man video is for this blog's CNY fun.

Whatever it is, even if the opposition wins the cyberwar, it doesn't mean they can win the general election.

As I previously wrote, the real fight will be on the ground.

The one that's closer to the rakyat and doing more for them will win.

Winning the cyberwar is of course important too, but the bulk of what it's all about is just satisfying massive ego of the combatants and all the nonsense about claiming meaningless bragging rights.

I think the Wanita Umno members who go from door to door campaigning for their party are more valuable than all those pompous high maintenance cyberwar and media generals as well as their minions whose main priority is just showcasing their loyalty to Najib instead of winning the much needed support for the establishment.

Well, you all know lah why they are like that.

If you don't know, you can read this previous post of mine,

I need to go help my mom in the kitchen now.

If got time, I will write again tomorrow.