Khaled in Kluang and the importance of grassroots work

My friend in Kota Iskandar told me earlier this morning that Johor MB DS Mohamed Khaled Nordin is visiting my hometown Kluang today.

It's part of his state-wide tour for what I was told to be preparations for the coming general election as I highlighted here,

Curious to know what Khaled will be doing there, I asked my friend to send me the itineraries.

So, she sent me this, 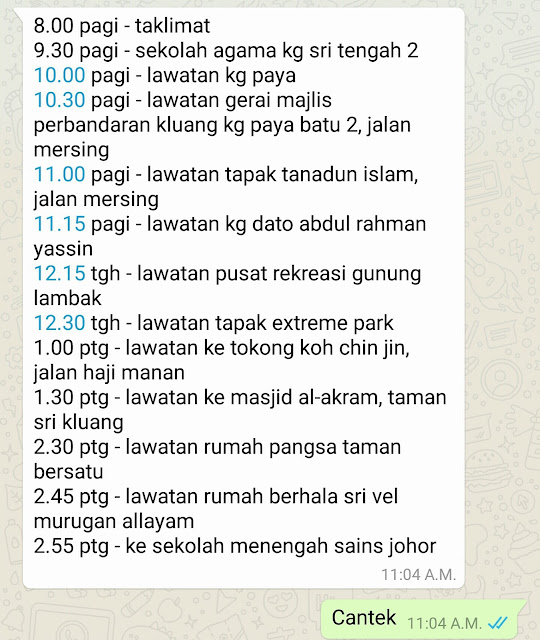 I'm quite sure Khaled will have talks and briefing on the coming general election with BN and Umno people in Kluang after completing the official visit. 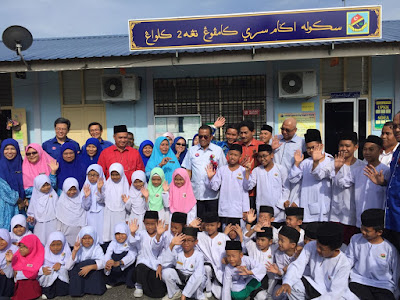 It's nice and reminded me of my younger days when I attended the Sekolah Agama Johor where I learnt more about Islam as well as read and write Jawi.

I used to be quite proficient in Jawi and could even do shorthand writing in it. Now very rusty already la due to lack of practice.

However, back then, my sekolah agama didn't have air-conditioning  or what looks like an internet or Astro receiver disc like in the picture.

Anyway, the parliamentary constituency visit doesn't look as detailed as that done by Khaled's predecessor TS Abdul Ghani Othman who was being more micro by repeatedly visiting the numerous balloting areas in preparation for the last general election.

Still, I think what Khaled and his team are doing is good enough as it is.

I shouldn't be comparing Khaled with Ghani too much as they are of different standards altogether.

I think it's good for Johor BN and Umno that Khaled is now on the ground as that's where it all matters for them to win support for the coming polls.

I always believe that the fight is actually on the ground rather than the stupid exchanges of accusations and insults in the social media or other propaganda outlets.

The side which is more grounded and closer to the rakyat will win.

That's how BN and Umno won all the general elections since Merdeka despite their flaws and weaknesses.

The opposition could not possibly beat them by mere rethorics as proven in the past.

As long as BN and Umno leaders still care to go down to the ground and do the necessary for the people like what Khaled is trying to do in Kluang today, the opposition will have to continue to struggle to justify their accusations against the government.

Merely playing politics may win some extra votes but it would not on its own ensure victory.

Being able to be there for the rakyat and doing the right things directly for them are more important than anything else.

If the opposition hopes to ever beat BN and Umno, they need to do or seem to be doing more work on the ground and be close to the people instead of just talking about this and that.

As Ghani once told his people during the campaign for GE13, no matter how bad were the sentiments caused by national issues, if they can still take care of the people at the grassroots level, the battle could still be won.
Posted by Annie at 12:49