A friend from Irda shared this photo of Johor MB DS Mohamed Khaled Nordin and his predecessor TS Abdul Ghani Othman at a function in JB today to celebrate the 10th anniversary of Iskandar Malaysia. 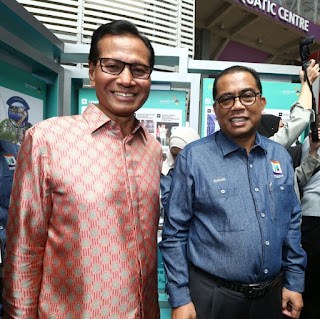 I have to admit that I was touched seeing the two guys together again. It's probably their first public picture together after the 2013 general election.

Seeing it, I can't help but to remember this picture of them taken at the MB official residence of Saujana on the day Johor BN candidates for the 2004 general election was announced, 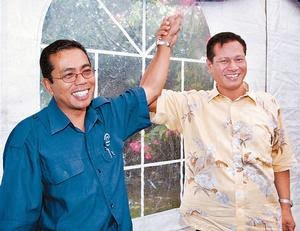 It seems such a long time ago....but those were the best days of Johor as I remember it.


He called because the event reminds him of the good time we shared helping in our little ways efforts by former Johor menteri besar TS Abdul Ghani Othman in making the project a success.

Well, actually I still call him Datuk instead of Tan Sri. I'm too used to it.

I'm quite sure the event will be given a full coverage by the press as PM DS Najib Razak was among those present.

The PM was earlier today at the massive Petronas' integrated petroleum complex in Pengerang, another major project initiated during Ghani's administration.

The project was mooted by Ghani himself.

In fact, almost all the existing crucial development projects in Johor now was started during Ghani's time.

That includes even the many affordable housing projects for the rakyat in the state.

The ones I'm certain not started during Ghani's time was the larger portion of development along the Tebrau Straits such as Forest City and others targeting foreign buyers.

Well, that's how things are in Johor now.

I do get a bit nostalgic as I'm writing this post :)

Back then was indeed a good time.

We worked hard to help Ghani for Johor without expecting anything other than a clear conscience of doing good in what ever little ways that we could.

My friend said Ghani was at the function tonight.

It's the first time I heard he's back in JB after leaving the state in 2013.

Ghani will always be my favourite leader.

He did all he can for Johor and his beloved Umno.

No one should forget his last sacrifice, contesting an impossible fight against DAP supremo Lim Kit Siang in the Chinese majority Gelang Patah in a futile effort to stop the Chinese tsunami of GE13.

The guy is good and incorruptible, and the people who loyally works with him followed his examples.

That's why I admire him so much.

Well, I wish him all the best.

In honour of Ghani, I'm reproducing in full this post from the BIGCAT blog as a remembrance of how it all started. 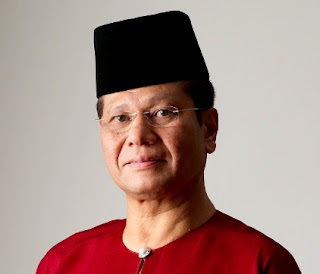 When Datuk Abdul Ghani Othman took up the mantle of leadership in Johor, he clearly displayed his balanced outlook, by introducing the holistic development approach in his first budget speech in 1996.

With that, Johor embarked on upgrading its clean water processing and distribution to provide clean water to as many people as possible.
They also embarked on the rural road programme "Jalan Kampung" through state GLC KPRJ, that finally saw thousands of kilometers of rural roads getting the tarred treatment, creating better accessibility to rural produce and services.
The arts in the form of music and dance were also added to schools' extra curricular activities to ensure students with such inclination has an outlet within a controlled environment and minimise the truancy problem.  It brought "Zapin", a folk dance particular to Johor, into international attention such that Johor kids are now performing the dance internationally.  It is also in a way part of Ghani's effort to maintain the "jati diri" (identity) of the Johor Malays.
In balance, mosques throughout the state were also encouraged to hold frequent and regular community activities to ensure that they stayed relevant as part of the spiritual fulfillment for muslims and the communities they served.  State-sponsored religious education continued being strengthened with linkages to enable a promising advanced education and career options for students while more schools were built.
State-sponsored community colleges were also introduced throughout the state to equip less academically-inclined youngsters with employable skills that will improve their future potential.
A number of forest reserves and natural heritage sites were also identified and gazetted to ensure that the state's dwindling natural forests are preserved and allowed to grow back up to the 30% mark set by the state planners while natural sciences research centres were encouraged to set up operation in the state's national parks.

Despite the 1997/98 financial crisis which was highly detrimental to Johor institutions, and with a number of its public commercial initiatives facing ruin, Ghani managed to steer not only these Johor institutions out of bad weather, but ensure they continue to grow stronger in the aftermath.
He was even more convinced that Johor's holistic approach towards development, will be the key sustaining factor that will be its defence against a recurrence of similar crisis as evidence in his 1999 budget speech.
Economics, afterall, consists of peaks and trenches, and no doubt that dips will happen again.
Johor and its people must be made fundamentally strong to ensure that it will be able to weather such crises with minimal damage and with that came the requirement to re-position Johor as a top investment destination that will rival the best in the region.
Core to the plan will be making the most of Johor's ideal location, existing logistics facilities, abundant resources and industrious locals to attract would be investors that will spur development of new industries, and ensure industrial resilience by re-structuring its economic growth drivers.
Firstly, Johor is blessed with a coastline that continues from the east to the west of the peninsular.  It has three international seaports and an international airport, many industrial parks, in addition to being located on one of the world's busiest shipping lanes.  What is required is a good road network or highway systems connecting them all, that will also facilitate better east-west access to raw materials and open up new areas for development.
Secondly, Johor Bahru was also getting heavily congested and subjected to frequent flash floods while state buildings and housing occupy some of the most high-value real estate in the city.  A new seat of government similar to Putrajaya is required, away from the commercial hustle and bustle of the city, but within easy distance that will not be inconvenient to the public, which will also free high-value real estate for commercialisation and the transformation of Johor Bahru City Centre.
Thirdly, its proximity to Singapore should be capitalised to benefit Johor; instead of simply being Singapore's backyard or hinterland, Johor should aspire to build a city of equal stature socially, if not commercially, to the city nation.
Historically, Johor had not been very high on the list of Federal infrastructure development funding as states such as Selangor, Kedah, Kelantan or Penang, but this time around the state required Federal assistance to make this a reality.
It had always been a middling state, not poor enough to require attention, but not near enough to the seat of power like Selangor to require Federal infrastructure focus, or as historically significant colonial outposts as Melaka or Penang to attract tourism projects.
The state itself did not have the financial means to make all this happen within a time-frame that would make it meaningful, nor would it likely be able to raise the funds itself considering the many development programmes continuously being put in place to raise the quality of living for the rakyat.
But Johor must position itself for the new millenium, therefore Federal assistance was required to make the transformation in a timely manner and a proposal was worked out by the planners at Bukit Timbalan.
Ghani and his people had then drafted a comprehensive plan for it in early 2000s and when it was submitted to the Federal Government, was given the green light by then PM Dr Mahathir.
However, by the time it was possible to implement the plan, it was Pak Lah at the helm.  Not only did the original plan became a "corridor", the crooked bridge was also cancelled, MRCB via its 4th Floor networkings made inroads through the EDL, and that legacy is now entrenched in Irda and JCorp.
Nonetheless, Iskandar Malaysia, is for now the only one of all the development corridors which still has the potential to meet its objectives.
Posted by Annie at 22:36