On Dec 23, the United Nation's Security Council passed a resolution demanding Israel to stop the building of more illegal settlements in the Palestinian occupied territory.

It's the first of such resolutions in 36 years.

The resolution was put forward by New Zealand, Venezuela, Senegal and our Malaysia. Special salute to our team in the UN and Wisma Putra.

All the member countries of the council supported the resolution with United States, the main defender of Israel abstaining.

The fact that the US didn't apply its veto power to block the resolution was evidence on how the world was so fed-up with the arrogance of Israel over the matter that even its big brother can't continue to ignore the atrocities committed against the Palestinians anymore.

I would like to believe that to a certain extent, Malaysia's good relations with the outgoing Obama administration helped in persuading Washington not to veto the resolution.

You all can read about it  in this report ;


Yes, the Israelis will ignore the resolution and US, under Donald Trump's presidency will revert back to blindly supporting them, but I'm still proud and happy that Malaysia didn't waste its mandate as a non-permanent member of the UNSC by moving forward the resolution together with same minded nations.

It is still a victory for those who want peace and justice for the Palestinians.

As stated in the report, it was a significant resolution because,

"It formally enshrined the international community’s disapproval of Israeli settlement building and could spur further Palestinian moves against Israel in international forums."

The fact that the resolution was not vetoed by US, reminded me of the American girl Rachel Corrie who died 13 years ago trying to defend a Palestinian home in Rafah, Gaza. 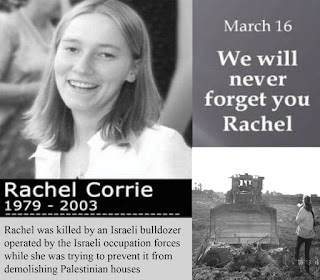 This is her story,

We will never forget Rachel Corrie and the Palestinians.
Posted by Annie at 15:42