Sometimes I really don't understand why the defenders of DS Najib Razak have to resort to whacking Tun Dr Mahathir Mohamad in defence of the prime minister.

This only make a lot of people pity the 91 year old statesman.

Whacking Dr Mahathir was exactly the tactic used by the people of Tun Abdullah Ahmad Badawi in the runs up to the 2008 general election.

In fact, it backfired.

I really sometimes wonder why they never learn from that.

Whacking your enemy in cyberspace feels good, but that's only as far as ego was concerned.

I think a better way for Najib's defenders to win the fight in cyberspace is by highlighting the prime minister's achievements which surpassed that of Dr Mahathir's.

I'm sure that there are many things that Najib did which are arguably better than what had been done by Dr Mahathir during his 22 years as prime minister.

Paused a bit and think, okay.

Okay, let me give an example.

The soon to be operational Mass Rapid Transport system is one of them. 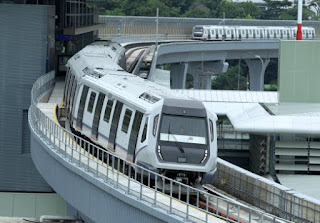 
Imagine this - much less congested roads in KL.

I'm sure that will make life better for a lot of people.

KL will soon catch up with Singapore, London, Seoul, Tokyo, and other major sophisticated capitals in term of public transport system.

Isn't that better than the KLCC Twin Towers, KL Tower, and all the other landmarks built during Dr Mahathir's time in the federal capital?

Seriously, defenders of Najib should highlight these sorts of achievements rather than wasting their energy trying to run down Dr Mahathir.

And the nicer the way they do it, the better the impact would be among the people.

They need to say it as a matter of fact, rather than trying to show off or being boastful.

Be nice about it.

"We are talking about direct benefits here, okay."

And if want to add, can say la "Hey, where got Najib steal all that money. See, he got the changgih MRT built what. If Najib is really bad, he would had stolen the MRT money and buy Rosmah more handbags with it, isn't it?"

Really, I think that's better than going around calling Dr Mahathir names or writing long winded sophisticated thesis on 1MDB in support of Najib which people can't be bothered to read.

You go around saying Dr Mahathir is a senile old man, and people will likely cringe.

That's because they know Dr Mahathir is not senile.

They will likely instead see you as kurang ajar (ill mannered) for saying that about an old man.

Seriously, it's better to highlight the good of Najib rather than the bad of Dr Mahathir.

And please do it without sounding trying to ampu and bodek. That only put off people, okay.

People want to hear good things for a change these days.

They are fed up with the fightings and all the bad talks.

Hey, on the other side, do you think everyone really like it the way they whacked Najib upside down like that?

It's the same the other way around also.

Everyone tired of the whacking.