A more united Umno as I listen to Jay Jay

The Umno general assembly has ended.

I was actually there at PWTC yesterday.

I think it was not so bad an assembly if compared to those of previous years.

It's just that I think there were less people this time, and everything wrapped up early everyday. Yesterday, they closed shop about 6.30pm.

But that does not necessarily mean it's bad. Maybe they were doing things more efficiently this time.

Everyone has pledged their loyalty to the party and its president DS Najib Razak.

All the rebels are more or less kicked out of the party or left on their own.

This time Umno was speaking with one voice under Najib as their leader.

I also highly suspect that the general election will be held early.

Najib himself said in his closing speech that the party was ready for it.

My sources had previously told me that it could be as early as March, but others said there would not be enough time for ground works to be completed if it's held that early.

Nonetheless, looking at the mood at PWTC over the past few days, and especially yesterday, I think they will push for the early general election.

I think it's because they don't want the opposition to have time to mend their rift.

Also, there's the economic factors to consider. There's a high likelihood that things are not going to improve much next year.

So, better to have the election early.

Those are quite reasonable considerations, I think.

Anyway, I was bored yesterday.

Unlike the previous days, none of my friends called me up for drinks.

So, I was at my usual spot near one of the building entrances doing my own little stuff there.

I nonetheless got a bit excited after Najib's closing speech because the evergreen singer Jay Jay was performing not far from where I parked myself to do my work.

I took this picture, 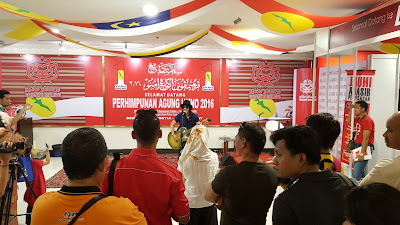 I really enjoyed listening to his singing.

Didn't record it though as my phone was running out of battery.

This is one of his songs which is my favourite,

Okay, have a good Sunday everyone.
Posted by Annie at 11:04