Most of the Umno people are leaving PWTC now.

I want to leave too but it's horrible traffic jam at these hours .

So, here I am writing this update sitting alone at one of the building enterence.

I think they wrapped up the whole things quite early compared to previous years.

Bumped into one of Najib's younger aide just now.
The guy cheerfully greeted me and was nice as usual.

That's good. At least he didn't turn arrogant after working for the PM.

He reminds me of a friend who is now a Najib's senior aide when he was in the young guy's position.

It's easier for people to like a leader if his/her people have good personality.

That's why a leader needs to get good people to work for him/her.

I'm now waiting for some friends to take me to dinner.

It's customary to hang out with friends after the whole day at an Umno general assembly.

The only difference for my dinner tonight is that my friends are former Umno operatives who now consider themselves to be "diluar gelanggang" (outsiders).

Too bad for Umno because these guys are very good operatives.

It's just that their bosses are already no longer in power.

It's one of those Umno things. When your boss is out, you are out too.

Does not matter if you are good or not.

My friends I'm having dinner with  tonight are basically Ronins  - samurai without a lord :)

I'm writing this sitting in front of the Teratai Suite at PWTC. 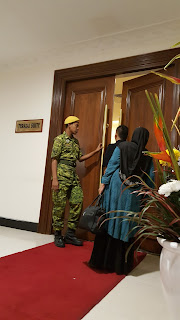 Found myself a power point on the wall here and set up my stuff on the floor.

I was doing some work on my laptop just now when Umno VP DS Ahmad Zahid Hamidi walked by with his people to enter the room.

He noticed me, smiled and said "Buat kerja, buat kerja."

I smiled back and waved my hand.

The guy was charming.

I can't say the same about many other Umno leaders these days.

Well, Javanese guys tend to be charming....like my father :)

I'm actually here to do some work and also to meet friends again.

Among others, he talked about being magnanimous again, just like he did last year.

Too bad that things turned worse after the last one.

Hopefully, it's not going to be like that again this time.

I'm quite concerned listening to the speeches of the party wing leaders and delegates yesterday.

Many were calling for more "rebels cleansing" of the party.

I think it's better for them now to win back support than kicking out more people.

Well, that's just my thoughts, and I'm not a party member.

If they still want to kick out more people, it's actually none of my business.

At the end of the day, Umno members are the ones who will decide what their party should do.

Anyway, unlike the past two days, PWTC is packed with people today.

I took some pictures, 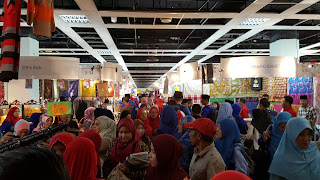 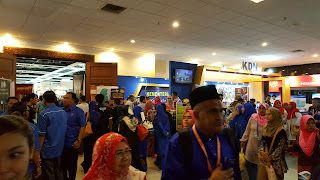 Guess, things are not so bad for the party after all.

Okay, I'm going to listen to the speeches now.

Maybe there will be one or two worth commenting.