Don't throw Chinese overboard while on a slow boat to China

So, we are going Chinese.

I think you all have read about it.

The news and commentaries about the whole thing are all over the place.

No need for me to put the links here. Well, I'm in the lazy mode these days anyway.

I actually prefer going Japanese, but Chinese is also okay with me.

At least now I'm quite sure Umno will not chase away the Chinese party MCA and Chinese-dominated party Gerakan out of BN.

I'm sure the Chinese who are going to pump in billions of ringgit into Malaysia are not going to be too happy if the ruling coalition kick out its Chinese component parties.

Need to take care of their feelings, okay.

Chinese are now the good guys. Accept it.

All those hate mongers who repeatedly called for Umno to kick out MCA and Gerakan and then combine with Pas to form a hardline Malay Muslim coalition must be quite frustrated by this development.

Otherwise, can miss a meal or two.

Whatever it is, BN will continue to be a multi-racial coalition, which is good.

What I fear all these while is that we have the Malays on one side and a mostly non-Malays gang on the other.

That's what the hate mongers have been trying to promote all these while under the guise of slogans such as perpaduan ummah and the need for Malays to defend themselves from the nefarious Chinese.

Basically, they want the Malays to turn racist by inflaming their sentiments to hate the Chinese.

The effect of such extreme racial polarisation can be quite devastating for the country.

We can end up like Bosnia or Sri Lanka, where they have to go to war with each other to solve their racial polarisation problem.

I think all reasonable people can understand this.

That's why, for me it's not such a bad development that Malaysia is now turning to China. At least the hate mongers could be checked.

Okay, back to the actual topic of Malaysia being pally with China. 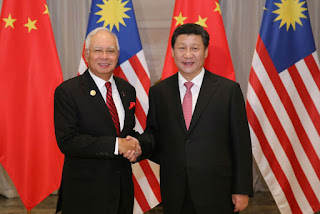 Honestly, as I said, I wish it could be the Japanese instead.

But the Japanese don't have the money anymore to do what the Chinese will be doing here soon.

They used to help us quite a lot back then when we initiated the Look East policy under the administration of Tun Dr Mahathir Mohamad, but ever since their economic bubble burst sometime in the 90s, Japan can't afford to offer much to us anymore.
They got their own problems.

As for the US, they never really care for us until the Obama administration. They prefer Singapore, or the Philippines, or Thailand, or whatever.

And US will not offer us what China is offering now even if they want to.

Not unlike Japan, the US simply don't have the money for it. In fact, they even owe China quite a lot.

So, it's not really a bad thing for us to be friendly with the Chinese.

We have to be friendly with someone, okay.

The way I see it, Malaysia is like a small kid at the schoolyard.

If a bigger kid offers to protect and even share the food from his lunch box with him, then why not take the offer.

After all, there are many bullies at school.

Okay, the bigger kid may not be so nice to look at, because he is fat, a bit smelly and has an overbearing personality, but being his friend is better than being clobbered by the other bullies.

Of course, the best is if we can stand up on our own like we used to be, but that's not how things are these days.

We have to admit that we are currently not in such a good shape with things such as world oil prices being in the dump now, causing our main bread winner Petronas to suffer.

Yes, I know, China will demand the South China Sea in return for all these help, but I think they will be reasonable about it.

Who knows, maybe they may even consider letting us have our little portion of the sea if we are really their good friend.

It may even be better that way than having to fight China and get really all bruised up for it.

China is known to take care of their good friends.

For instance, they really helped the Sri Lankans with money and weapons to beat the Tamil Tigers within just a year after the country was ravaged by the rebellion for decades.

Then they also help to rebuild the country.

In return, of course they got all the projects and the right to once a while park their warships there to irritate India.

But still, Sri Lanka seems to be getting better now.

I was there on a trip after the war and the country looked reasonably good.

Whatever it is, China really have better record in helping friends than the US.

Just look at the US' friends in South America.

And when Argentina went to war with Britain over the Falklands, the US despite claiming neutrality, actually sided with their Anglo Saxon brothers from across the Atlantic despite Argentina at that time being its ally too.

Look at the Philippines.

The Philippines has been a US' friend for donkey's of decades yet it is still like that.

It's still not doing really well.

US never really help it.

Maybe that's why that a bit crazy Philippines president Rodrigo Durtate is giving big brother Uncle Sam the middle finger and turning to China for help.

I'm quite sure China will go all out if given the chance to help the Philippines.

That would really shut down US in this region.

That one I'm leaving  it to those who enjoy eating it....hahaha.

I better get ready for work now.

Song of the day is this;