I was at the PWTC the whole day yesterday.

Took this picture when I arrived, 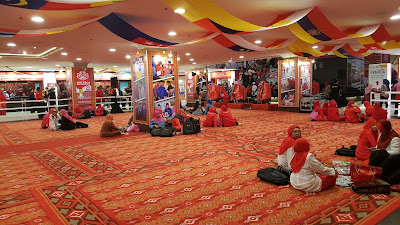 The place looked nice. They probably hired an interior designer to make the place like that.

I remember back then when they just put a carpet at that very place so that the makcik-makcik Umno can sit there and watch the debates and speeches on a big screen.

Nothing much happened yesterday except in the evening when Umno's number two DS Ahmad Zahid Hamidi opened the party wings' assemblies.

I think his speech is all over the place by now.

I spent most of the time there yesterday meeting old Umno friends.

Among others were that aide of Johor MB DS Mohamed Khaled Nordin and a guy from Zahid's office.

It was fun meeting them again.

As usual I have a hearty debate with the Khaled's aide about the current situation in Johor but it was all in good spirit.

He's a good aide as he defended Khaled against my complaints very well.

The Zahid's guy was equally nice.

It's good to note that he sounds very confident of his boss' abilities.

Late in the afternoon, I bumped into a really good friend whom I have not met for quite a long time.

He is a successful businessman whom I first met when I just moved to Johor many years ago.

He was at PWTC to also meet old Umno friends.

The relatively young man is a staunch Umno supporter and one of his habits is to spend money helping the party.

During elections, he will buy a huge number of BN flags and posters for campaign purposes.

Sometimes he even put them up himself along with his workers.

He is a genuine case of an Umno man who truly loves the party for what it stands for.

When Khaled and gang took over Kota Iskandar after the last general election, the guy took into his company several of TS Abdul Ghani Othman's people who lost their job due to the departure of their boss.

He did so because he knew that Ghani's people are good and were sincere in their work for Johor and Umno all those years when their boss was the MB.

Too bad that Khaled don't see it that way and unceremoniously got rid of them.

It's one of Umno people's ways that I most dislike. Genuine talents, sincerity and honesty are under appreciated.

My friend and me mostly talked about the good old days when Ghani was still our MB.

Those were satisfying days of clear conscience despite the hard and challenging works.

We were later joined at the outdoor cafe where we were sitting for a cup of tea by another old friend from Johor.

The other guy, who works for a government agency was more relaxed.

He was quite confident that Umno will prevails.

1. The opposition parties are in disarray.

2. The Malays are still mostly scared of the DAP Chinese taking over the country.

3. Umno has the resources to win the elections.

Just before we were about to call it a day about 9.30pm, an old makcik approached us and asked whether we would like to buy a meal set from her.

I had noticed the old lady  going around the PWTC area the whole day selling the meal sets.

"Makcik dari Subang," she said when I asked where she came from.

"Macam mana jualan hari ni  makcik?" I asked as I noticed a worried look on her face.

I ended up buying two packs of the meal sets from the makcik. 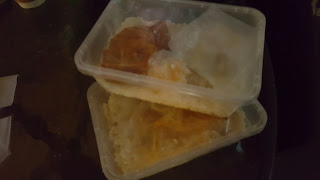 She was selling each pack for RM6. I paid her RM20 and told her to keep the change. I think you all will do the same if you saw the worried look on her face.

I hope more of the Umno people who will be at the PWTC in the coming days will buy the meal sets from the makcik.

I may drop by there again today as there are still friends who want to meet me again.

Well, hope you all have a good day.