Saw this at RPK's,

and told myself to be even more careful with stories which involve racial and religious issues.

As I have always believe, there are people whose modus operandi is solely to incite hatred between Malaysians to achieve their goal.

They want Malaysians to hate each other because of their different races and religions.

Their objective was obvious, to make the Malays angry with this Suat Ling Lim, who is a Chinese and assume that all Chinese are Malay-hating kurang ajar (uncouth) racists.

I actually received a screenshot of that fake Facebook page yesterday and to be honest, was angry and almost did a posting about it. 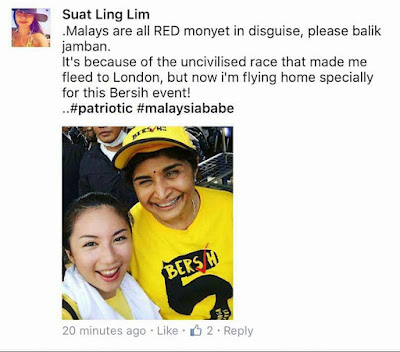 If not because I was busy with some personal issues and had no time for it, I would have done so and after that forced to apologise to Suat Ling Lim too.

Whatever it is, I should have checked properly first before getting angry with Suat Ling Lim.

Well, too bad for RPK that he had already published it.

He must had received the same screen shot like me too.

Nonetheless, I have to give him credit for promptly apologising.

Hopefully the damage already done on Suat Ling Lim was not too great.

The whole thing is a lesson for me and hopefully for you all too.

Do not simply believe when people tell us such stories.

If possible don't read the writings of people who constantly promote hatred between people of different races and religions.

Anyone with such modus operandi can't be good.

These are people with malice in their heart and their lack of talent makes them resorting to vile means of pitting people against each other to achieve their objectives.

I think you all are matured and smart enough to detect such hate mongers and stay away from them.

Please do not hate each other just because there are people who told us that we must do so because we are different, okay.

We are all Malaysians.

Instead of hating each other, we must try to bring out the best in us for this country.