Melayu kampung are not Rednecks

I'm not very good at changing myself.

If I love someone, I can never unloved that someone.

The same with my beliefs.

It's hard for me to disbelieve things that I already believe in.

For instance, I believe in a moderate Malaysia.

When the Chinese tsunami happened in 2013, I got angry and tried to change that.

I wrote this the morning after the 13th general election,


However, just five postings later, I had to write this,

Searching for the moderate Johorean inside me

I'm just not good at hating or staying angry.

I believe that it's because of the Malay inside me.

Generally, the Malays are not very good at being hateful.

I believe that it's because of the way they were conditioned by their religion, culture and natural environment.

That's my theory about Malays, at least.

Malays are one of those docile races.

It's just the way they are.

All those fired-up Malays you occasionally saw at rallies and such were actually only riled up by politics.

Some are just trying to be like others (of other races).

When they sympathise with the Palestinians and other Arabs, they will try to behave and even dressed up like them. 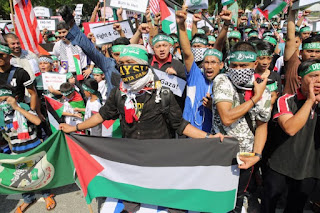 Really, it's just the way they are.

Otherwise they would be just nice and friendly.

If no one provokes or incites them, they would not disturb others.

The Malays are also easy at accepting others as their friends.

That's why there are so many races in this country.

Anyone can come here and make a life out of the place, because the majority Malays never seriously tried to stop it.

Malays make lousy racists because of that.

You show them that you like them a bit and they will love you for it.

I used to caution a friend at the Japanese embassy that if he continues to say "InsyaAllah" all the time when talking to Malays here, he will likely ends up getting married to a Malay girl and never go back to Japan.

The guy thought I was joking, but seriously,  Malays love to be loved by others.

When Donald Trump won the American presidency the other day, there were those who suggested that the rural Malays should be deemed to be the same as  the rural whites of America who formed the backbone of Trump's support.

They suggested that the Malays in the kampung are as racist and uneducated as that segment of Trump's supporters.

They want those Malays to rely on such instincts in their support for Umno in the next general election.

Obviously, the people who made those suggestions do not really know the real Melayu kampung.

They probably never live in the kampung among those people. I know of one of them who is not even a Malay or even like the Malays.

Trust me, the Malays in the rural areas are not as depicted by those people.

The Melayu kampung are generally just practical people who want to carry on with life the best that they know how.

As I said, they are not racists.

If you are a Chinese, and want to open a shop in their kampung, please do not worry that they will burn it down.

In fact, they will buy from your shop without much prejudice.

Many Chinese from back then made a good living by setting up trade among the Malays in the kampung.

You don't have to fear them, okay.

The overwhelming majority of them are good people.

Actually, I'm really appalled when some people tried to paint an ugly picture of the rural Malays.

It's because in actual fact, Melayu kampung are generally the nicest of all Malaysians.

Go and live among them for a while and you will know that I'm not lying about this.