The need to be intelligent and Annie's authentic mamachari

It turned out that my grandmother's condition is not as bad as I had feared.

She is okay now.

Well, I'm back at work since yesterday.

Lots of things to do and no real time to write.

Sometimes I wonder how some bloggers can write very long posts complete with beautiful charts and graphs.

And some are so serious that they write as if Malaysia's fate is in their hands....and that Malaysians are doomed if they fail to read and agree with their writings.

It's really none of my business how people write their blogs.

I don't believe that I'm influential or popular at all.

In fact, I don't want to be influential or popular.

I really don't see the point in being like that.

I think that being influential or popular will only make me egoistical and shallow.

Just expressing myself and sharing my thoughts with anyone who care to read this blog.

I don't even believe that I'm clever or anything like that.

But I do had seen things happening up close.

It's just those things I saw that I'm presenting here.

Well, of course I comment a bit on those things, but  you all have to decide for yourself on how to judge what I write.

It's just someone telling me that another person is nasty, fat and smelly.

My own opinion could be that person is actually softly sweet, cuddly chubby like a baby walrus and just a bit pungent only.

Okay, the nasty part is a bit true though. Scary even. Ha ha ha....

Hey, for all you know, those prominent bloggers are just putting up a smoke screen and are actually in love with each other :)

Anyway, the whole point is that, you all have to filter what you read ya.

I can't be 100 per cent correct all the time and so do the other bloggers.

The same with the TV and newspapers and in fact the whole cyberspace too.

You all simply have to be intelligent in processing the information that you received.

So, if you really want the truth about a prominent blogger being nasty, fat and smelly, the best way is to try meeting the blogger in person.

I would also suggest that you try disputing the blogger's opinions to see whether the nastiness will come up to the surface.

As for the fat and smelly allegations, you just have to see for yourself and sniff a bit, okay.

Hey, enough of all that. I need to get up and get ready for the day.

Going to ride my bicycle again before going to work.

It's my exercise routine now.

I went to buy the bicycle that day but can't find the one that I wanted.

My father ended up buying me a second hand one. 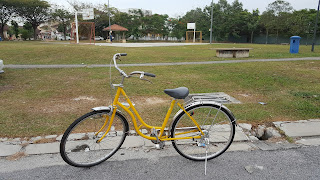 It's a classic Kuwahara city bicycle and came direct from Japan.

I need to get it a basket and bell though.

Will try to get yellow ones to match the colour.

Okay, really need to get up now.

Have a nice day guys.