BN lost its two third majority in the Johor state assembly the other day.

The story is here,


That's the first time ever.

For someone who was part of the team which defended Johor in the last general election, I was a bit sad over it.

Well, we worked so hard on it back then. okay.

But I don't really blame Jorak assemblyman Shahruddin Salleh for doing what he did.

He is after all the right hand man of TS Muhyiddin Yassin in Pagoh and thus his political career is tied with that of the Pribumi Bersatu president.

After all, it is almost certain that he will be dropped from the BN candidate list for the next general election.

May as well he gets out now. At least he would be seen as a hero by those who hate BN and Umno.

I also suspect that Shahruddin will likely replace Muhyiddin to contest the Pagoh parliamentary seat in the next general election while his boss moves to Muar as rumoured.

That's bad news for Datuk Razali Ibrahim, the current Muar MP whose majority was reduced to merely 1,646 votes in the last general election.

Razali, who is a deputy minister had such a bright future in front of him back then and was even tipped as the second in line for the Johor MB post.

Now his political career may be snuffed out altogether.

Nonetheless, looking at the bigger picture, I don't think there will be a mass exodus of Umno members switching to Pribumi Bersatu in Johor.

And Shahruddin is likely to be the only one among the BN assemblymen and MPs who is motivated enough to do so.

The others, even if they are personally unhappy with the BN and Umno leadership will stay put.

Unlike Shahruddin, they don't have to worry about getting "killed off" for being too close to Muhyiddin.

The former Umno deputy president actually doesn't have too may die hard supporters in Johor despite being the state MB for nine years two decades ago.

Yes, he has his supporters in the state but they are not of significant number  or overly loyal to him.

Muhyiddin on his own is not much of a force in Johor.

The real danger to especially Johor Umno is still the unhappiness over several issues among the Malays on the ground.

If not addressed properly, and combine them with the huge hostile Chinese electorates in the state, then things can be quite dire.

If they fail to prevent the Malay votes in the state from further splitting, then it's not impossible for Johor to ends up like Selangor, which has about the same electoral breakdown.

I'm of the opinion that the current over dependency on the palace-driven "Bangsa Johor" concept may not be enough for Khaled to keep things together.

Khaled and his boys simply need to do more....and better.

It's going to be tough but there's no other way to do it.

Guess by now they know that occupying Kota Iskandar does not really mean a life of leisure and luxury all the time.

They have to work hard too, okay.

Whatever it is, I don't see Johor returning to the good old days when Umno and BN were so dominant there.

Back then, Johor was considered as the Umno bastion.

Anyone contesting under the BN ticket in Johor is not assured of victory anymore.

They can lose, even in the heart of Bangsa Johor heartland of Muar. 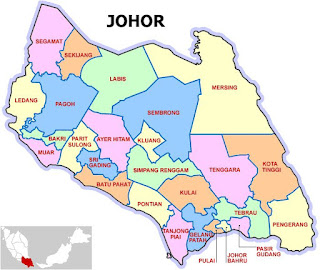 Seriously, Johor is no longer the Tiang Seri Umno.

That title has moved to Sabah, I think.

That's where Umno is supreme now.

At least that's how I see it, based on reports and talks with friends from Sabah.

I wish I can write more about Sabah but I have only been there once.

So, I don't think I'm qualified to do so.

Unlike some people, I will not try to pretend to know about a state which I have hardly been to.

If I can go there and be on the ground more often, I will write more about that new  Tiang Seri Umno.
Posted by Annie at 10:49