I really think the authorities should move in and stop the planned Bersih and its rival Red Shirts rallies.

Such rallies are not good for the country.

I do believe in freedom of expression and such, but not to the extent of causing public disruptions.

As happened in the past, the authorities tolerated these rallies but the organisers kept doing it by breaking the laws.

For instance, they agreed to hold the rallies at a stadium or padang but later on march through streets to get there, causing disruptions to traffic and everyday lives.

This should be stopped.

Organisers of these rallies should not be allowed to repeat such nonsense again.

The authorities should just strictly enforce the laws on this matter.

I'm of the opinion that if people want to express themselves, they should argue their case through the available channels without causing problems to others.

They can even criticise the government or the opposition for that matter, in the social media if they want.

That's why I allowed almost all of those comments in this blog through.

Let everyone release their anger and frustration with minimal damage.

It's better than letting everyone goes to the street and causing problems.

Just look at how ugly the Bersih versus Red Shirts thing has turned out now. 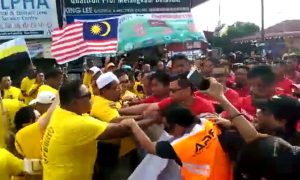 You all had seen the videos, right?

I think it will only get worse if they are to clash at the rallies in downtown KL next month.

Seriously, why can't these people wait for the next general election?

If so itchy to quarrel, just whack each other in the social media lah for now.

Why the need to scare others who don't want to have anything to do with their nonsense and all those rallies?

Such a waste of time and energy too.
Posted by Annie at 12:10