A friend who is in Japan sent me this link via Wassap this morning,

He jokingly wondered whether BN paid that Stupidman Hew to be stupid so that they can whack DAP.

May Allah fry me in hell if I'm lying about this, okay.

I said NO to my friend's muse.

I believe that Hew is actually stupid to begin with, and when he got arrogant because he is a DAP man, he becomes even more stupid. 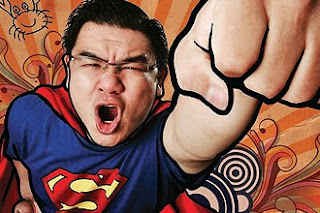 BN doesn't have anything to do with his stupidity.

It's a malady afflicting many DAP people after the Chinese tsunami of GE13 in 2013.

I wrote about it last week in this posting,


That one was about DAP's Taiping MP Nga Kor Meng and his stupid evangelical Raya greetings.

The causes and symptoms of their stupidity were the same - arrogance.

I believe even the Chinese who were so supportive of DAP during GE13 would have cringed at their behaviour.

And Hew and Nga were not the only ones.

Other DAP leaders and followers tend to have the same attitude.

They think they can get away with anything because they believe all Chinese in this country will defend them no matter what bullshit they were peddling.

It's the reason why the opposition is in such a mess now.

Even their allies were put off by them, culminated by the Pakatan Rakyat break-up after Pas pulled out from the back then unstoppable opposition coalition.

And as I predicted in the earlier post, the DAP people will continue to issue stupid statements such as those by Nga and now Hew.

They simply can't help themselves.

The Chinese tsunami of GE13 really got into their head, making them so big.

I think their head will continue to swell until they explode in the next general election.

And there's nothing they can do to avoid that now.

As it is, more and more Chinese are getting fed-up with their arrogance and some even choose to change side as witnessed during the Sarawak election as well as Kuala Kangsar and Sungai Besar by-elections.
Posted by Annie at 16:16