About expressing thoughts and Singaporeans' bakuteh

Arrived in KL about 9.30am yesterday and straight away get down to work.

Later in the afternoon I managed to catch up with a friend who is a prominent blogger, supportive of Tun Dr Mahathir Mohamad.

He is actually the only one among my friends from his side who is still talking to me.

The others don't trust me, I guess.

On the side supporting PM DS Najib Razak, I also only have three or four friends who still talk to me.

It's not easy to stay in the middle.


That one was just me expressing my thoughts. Just like when I wrote as if I'm talking to Najib.

It's true what some of the commentators were saying, " Who the hell am I to advise Dr Mahathir?"

Of course Dr Mahathir and Najib don't read this blog.

Anyway, my conversation with my friend went partly like this;

Annie : "Ya la, you all dragged the old man all over the place like that day during the by-elections for what? The guy is too old to campaign, okay. He collapsed how?"

Friend : "Where got we dragged him. Tun himself wanted to do it. You know la how he is. If he wants to do something, he will do it. No point telling him what to do.

Annie : "I know, but you all really should try harder. You all should at least tell him not to tire himself out like that or at least slow down la a bit. If our fathers are that old, I don't think we will want them to do what Tun is doing. He tried his best already, okay. Kesian sangat kat dia. You all fight all you want la, but let Tun rests. Now he's getting whacked for working with DAP. That's sad, don't you think?"

My friend is a cool guy.

His writing is strictly factual, probably because of his training as an accountant, and he never gets really emotional like many other bloggers who are involved in the Najib-Dr Mahathir fight.

That's why he can still talk to me and I appreciate him for that.

Then at night I had dinner with my mother and a family friend in Bangsar.

My mother was busy as usual and arrived a bit late.

Another oldie who doesn't know how to slow down.

"Ma, can you go on leave and spend time with Pa for his birthday in September?" I asked.

"See how...." she said, of which I conclude that she's too busy with her work for nice things like that..

The family friend who is close with my parents just smiled at that as he knows how things are between the two of them.

He is also quite knowledgeable about politics because he served under former Johor MB TS Abdul Ghani Othman for many years.

I worked a lot with him during Ghani's last term in Johor prior to the last general election.

We talked quite a bit about the Najib-Dr Mahathir fight and I conclude that he was not happy with many things done by Najib but is not supportive of Dr Mahathir.

He's a staunch Umno supporter, having served the party sincerely for so long and doesn't want it destroyed.

"For good or worse, Najib is the PM and party president. He's our choice in the first place, It's not right for us to kick him out except via the party's proper mechanism or election. We must not override that. We simply have to wait now," he said.

I can sensed that my mother was bored with all the Umno talks.

I believe that she voted for the DAP in the last two general elections. At least that's my suspicion.

Her parliamentary constituency is Kluang and for state, it's Mengkibol. Both now under DAP.

'Eh, what's wrong with Guan Eng suing Joceline Tan like that har? I can't see anything wrong with Joceline's article," she blurted out suddenly.

I was surprised that she followed that issue.

"But that's childish of him," my mother added.

I just laughed at that. My sentiment exactly.

My mother also complained about the ringgit last night.

"It's now about RM3 for S$1. Used to be less then RM2.5. All the Singaporeans are coming over and buying up things until nothing left for us in Kluang. I'm begining not to like them," she said.

"Just the other day your grandma wanted to eat bakuteh but the stall guy said all booked  already because a whole bus load of Singaporeans were coming over that day.

"One serving is RM10, that's only over S$3. That's very cheap for the Singaporeans. We really need to charge them more," she added.

Yup, my grandma eats bakuteh. She's Chinese and a non-Muslim. So, she eats pork.

Despite her complaints, my mother also shared with me a picture she took in front of my big auntie's place when she was in Singapore the other day, 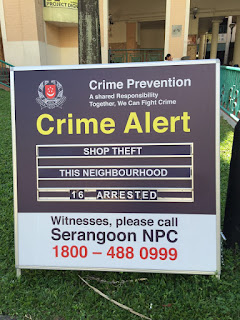 "See, we need to try to be more like the Singaporeans on things like this. Very efficient and always come up with new ideas to make their neighbourhood better," she said.

Well, I have to agree with her on that one.

Today, I'm mostly working and nothing else.

Got some time to write all these just now but need to get back to work now.

I will try to write again when I have the time later.