On Thursday last week (July 21) I wrote three posts in the wake of the announcement of US Department of Justice's (DoJ) civil lawsuits related to 1MDB,
A response to Annie's 136 pages of hard read

I had not written that many posts in a single day for quite a while.

The total number of pageviews of this blog on that day was 4,768.

Yesterday, I just wrote this seemingly inconsequential post about Marina Mahathir and her armpits,

And the total number of pageviews of this blog yesterday was 4,433.

To prove that I'm not making this up, here's a screenshot of this blog's latest monthly pageviews chart 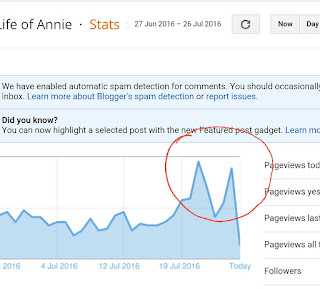 The two spikes in the red circle are readings of pageview counts on those two days.

So, what does that tells us?

For me, it's  an indication that what to many seems insignificant may actually be almost as important for Malaysians as the big issue.

Yes, what Marina Mahathir wear may have almost the same amount of impact as an allegation that billions of ringgit were stolen from us all.

That's the reality of things in this country.

We actually care about the "small things".

Of course some of us will try to deny this, claiming that we are more matured and sophisticated than that.

But, for me that's pride talking more than anything else.

That's why we failed to see the full extent of what's coming to us.

For example, we knew that the Chinese tsunami was coming prior to GE13 but we never expected it to be so huge that BN almost got wiped out by it.

Hey, the Chinese cannot be that fickle minded that they would swallow every garbage that DAP dished out to them, so thought many of us.

I was one of those with that kind of thinking back then.

And how wrong I was, right?

The same thing happened these past few months.

Everyone thought the Chinese are as a whole in the DAP's bag.

The results of the Sarawak election as well as the Kuala Kangsar and Sungai Besar by-elections proved that we were wrong.

We failed to realise that the Chinese actually do care about the seemingly small things such as the not so nice behaviour of DAP people.

I bet the DAP people didn't see that coming too.

So, lesson of the day was that - pakai lah baju yang tak nampak ketiak so that the pakchik and makchik dikampung tak salahkan cara ayah mendidik awak.

Don't be so high and mighty to think that we can do anything we want because it should be so trivial for anyone to care and censure us about it.

The reality is, Malaysians care about all those things, okay.

Now you know why despite all the allegations against PM DS Najib Razak, he may still be our prime minister after the next general election.
Posted by Annie at 12:12