Spent the first day of Raya yesterday at one of my father's family houses in Klang and that of his eldest brother's in Denai Alam.

Consumed quite a lot of lontong, rendang and lodeh.

There's also the ketupat plastic ones but I avoided that.

Miss the ones wrapped in weaved coconut leaves. 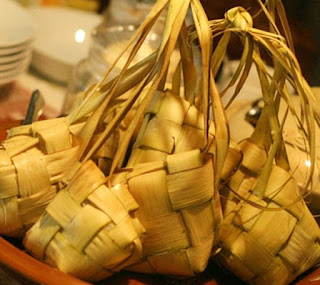 Spent the morning at the house in Klang,

The best thing was that no one who came to berRaya there talked about politics.

Had a long chat with an uncle who works as a security personnel at UiTM Shah Alam.

He was a bit worried because his contract will expire next year and there were talks that it will not be renewed.

"They just want to get rid of us and use those from private security company.

"Maybe some well-connected people with  friends inside there had been lobbying to get the contract.

"And the easiest way is to get rid of us," he said.

The uncle used to be in the army and at one time served in one of those United Nations peacekeeping mission in a war-torn country.

Such was the worries of an ordinary guy.

To provide for family and fulfill responsibilities.

Nobody talked about Najib, Muhyiddin, Mahathir, Guan Eng or even 1MDB....at least not to me.

However, at Denai Alam later in the afternoon, there was a bit of debate on such things between my Pak Long and youngest aunt.

My Pak Long is a former staunch Pas supporter who is now a staunch Amanah supporter. My aunt is a staunch non-member Umno supporter.

Pak Long was questioning Najib's innocence in the 1MDB thing while my aunt was defending the PM, his wife, children etc.

I can't help but to overhear their exchanges but tried not to listen too much.

It's Raya, okay. Time for peace.

Well, at least before I left the place, the duo had became okay again.

At least they are better than some other people who choose to become enemies for life just because of politics.

Really stupid that one.

I placed a lot of blame over that on people who peddle hate and enmity among us.

No retreat no surrender.

I know la they need to earn a living and selling hate is the only talent they have, but don't be too much, okay.

I hope we can keep that in mind when we remember our friends who are now our enemies.

Hari Raya is a time for forgiveness....let's try to find that in our heart.

Okay, need to get ready for beRaya  today.