Some Christians are irritating, but that's not a reason to hate them all

Okay, enough of the armpits stories.

So many people are angry with me already because of them.

Actually, it's not even really about armpits.

It's about the stuff that we Malaysians like to read.

Guess, that's too hard to get.

Today, I want to write about something more serious.

I read this story earlier in the morning and prayed that it will never happen in this country,


It's a Reuters' story picked up by The Mole and given a modified title.

The Reuters' original title is this,


Yup, it's a story where Islam got another round of bad Press.

The crazy terrorists were described as Islamists.

Come on, Islam doesn't teaches us to slit the throat of Christian priests or anybody's throat for that matter.

Islamists don't do such things. Islamists are those who practice the true teachings of Islam.

They are good people.

Okay, it's true  that the terrorists in this case are Muslims, but they obviously had been influenced by some bad people to do those horrible deeds.

I believe that they had been goaded by those people and ended up murdering the Christian priest.

'Christians are enemies of Islam. Kill them. Slit the throat of their priests," those bad people must had told those crazy terrorists.

That's why I have been writing about the need for everyone to cool down in this country.

Stop goading Muslims or there will be the crazy ones who may end up committing such murderous acts.

But of course some people thrive on doing just that.

They told the Muslims to hate the Christians.

The Christians are coming to get you, so the Muslims were told.

Okay, I'm also sometimes got irritated by some Christians and their religious talks.

But it's not to the point of making me hate them.

Back in college, the overwhelming majority of my A-level classmates were Christians and they were mostly of the evangelical type.

They were nice to me and invited me to join their Christian fellowship gatherings.

They will have a bit of a picnic, play guitar, sing songs and talked about their Christian faith. 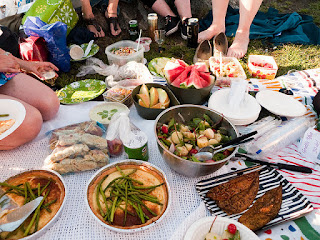 I was like....okay, go ahead, I just want to enjoy the tuna sandwiches and lemonade. You all can talk about Christ and everything, but no way in hell I'm going to believe in the trinity stuff and all that.

Islam is cool as far as I'm concerned.

And I'm not even the Islamic religious type.

But I don't hate my Christian friends even though to some, what they did by inviting me to join their Christian fellowship meetings could be deemed as trying to convert me to Christianity.

I know my friends. They have no bad intention towards me.

However, another friend who is a Catholic was actually very angry when I told him about me joining those gatherings.

"These stupid evangelists are going to get all of us Christians in trouble. It's against the law for them to invite you to their religious gatherings," he said.

"Relax Les. I don't think I will ever convert to Christianity. Those guys actually make your religion seems lame, okay. Picnic with lemonade....and religious talks....sheeshhh...," I replied.

"I'm actually the useless friend. According to my religion, you all Christians are the ones going to hell. And I'm not even bothered trying to save you all. See, you got it or not?"

Well, that's how I handled my Christian friends.

Really. I don't hate them and I don't go around telling others to hate them.

Yes, true that most Christians that I know are anti-establishment to a certain extent, but that's not a reason to hate them.

That's their right to be anti-establishment or whatever.

Instead of hating and threatening them with physical violence and stuff, pro-establishment people need to be smart and instead try to convince them that the establishment is actually good.

If there are people telling you all to hate Christians or people of any religion for that matter, ask them back for their motives.

You can ask them something like this - "Are you really trying to protect Islam and our akidah (faith) or are you actually trying to make us hate Christians because you yourself hate them and want everyone to hate along with you?"

Or you can ask them something like this - "Are you telling us Muslims to hate Christians because your ex-boyfriend who is a devout Christian treated you very badly before he dumped you?"

Yes, I believe that we Muslims are secured enough with our faith. There's no need for us to hate others just because they are of different faith than us, or of different political ideology.

Oppose or disagree with them is okay, but not hate them.
Posted by Annie at 14:11