Muslims must not become haters of Christians

When an airhead bimbo in France called for a Christian crusade against Islam, how are Muslims in Malaysia should react?

Should they respond by declaring jihad on the Christians in this country?

I don't think they should.

You can read about that desperate to be popular female bigot at Rocky's post,


A call for Crusade in France


Good Muslims in this country should just be who they are - good Muslims.

And being good Muslims, they should refrain from hating others who are not of the same faith as them.

That has been the way with most Muslims in this country.

They are good people who are willing to share this country with others, and for that they and this country are blessed by Allah. 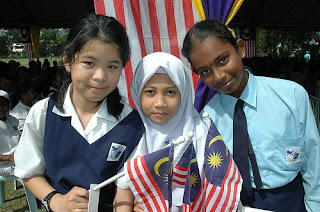 Just look at how prosperous and relatively peaceful this country has been.

Even if the others allegedly do things which the Muslims don't like, they should leave it to the authorities to handle things.

They should not listen to all the goading to hate the Christians, or anyone else by people with vested interest or personal vendetta.

Those who said that sorts of things are actually trying to manipulate the Muslims because they are the majority in this country.

They want the Muslims to use their majority power to suppress the minority Christians for their own personal interest or satisfaction.

Yes, there are bad Christians, but there are also bad Muslims. Please always bear that in mind.

I'm of the opinion that those who called for Muslims in this country to hate their Christian fellow Malaysians are actually trying to cause Muslims to be further vilified by the world.

They want Muslims to act aggressively or even violently against the Christians so that later on they could be blamed when this country goes up in sectarian flame.

Muslim majority persecuting minority Christians in Malaysia - they want that to be the headlines across the world.

I believe when that happened, those people who are now trying to instigate the Muslims to hate the Christians in this country will turn around (again) and blame the Muslims themselves for the mess.

Do check the background of those bad people to know why they are calling for the Muslims to hate Christians in this country.

That's why I made these suggestion in my previous post,

If there are people telling you all to hate Christians or people of any religion for that matter, ask them back for their motives.You can ask them something like this - "Are you really trying to protect Islam and our akidah (faith) or are you actually trying to make us hate Christians because you yourself hate them and want everyone to hate along with you?"Or you can ask them something like this - "Are you telling us Muslims to hate Christians because your ex-boyfriend who is a devout Christian treated you very badly before he dumped you?"