About wasted effort, Mcoba boys and a bit of Guan Eng

I also didn't get excited when Tun Dr Mahathir Mohamad met the Yang DiPertuan Agong to submit the Citizens Declaration demanding the resignation of PM DS Najib Razak.What can the Agong do anyway?

And this is the latest on it -


KUALA LUMPUR, Sept 21 (Bernama) -- Datuk Seri Najib Tun Razak said Yang di-Pertuan Agong Tuanku Abdul Halim Mu'adzam Shah had explained to Tun Dr Mahathir Mohamad that he could not interfere in the efforts made by Parti Pribumi Bersatu Malaysia (PPBM).The Prime Minister said he had been informed by the Yang di-Pertuan Agong about the audience granted by the King to Tun Dr Mahathir, who is also PPBM chairman, at Istana Anak Bukit, Alor Setar, last week."At the meeting, the King had taken note of the issues raised by Tun Dr Mahathir. However, the Yang di-Pertuan Agong also explained to Tun Dr Mahathir that he could not interfere in the efforts made by PPBM," he said in a statement today.Najib said that this was because the declaration made by PPBM did not comply with the constitution and any action should be taken according to the normal practice which was through the Parliament and the election system for the people to make a decision.-- BERNAMA

Well, I have been advocating for everyone to calm down and wait for the general election from the start of the whole thing.

If you want to see Najib ousted so much, just vote BN out at the polls.

That should be the only way.

No need to waste so much time and energy on the other things.

People actually need the time and energy to work and make their lives better.

You all know lah these days, everyone complaining about how hard life is.

If that's really the case, then I think everyone should work harder instead of being pre-occupied with things that they can't do nothing about.

Ya, everyone should just do things better instead of merely bitching.

If you are a student, study harder and get good grades so that your PTPTN loan can be converted to scholarship.

That's better than just whining about the perceived hardship and following around creepy people like Hishamuddin Rais at anti-government rallies.

Honestly, if I'm the Agong, I would throw away the Citizens Declaration just because there's the creep's signature on it.

"Sorry, Che Det. I actually can kick out Najib but I'm not going to do that just because you gang up with such a creepy guy," I would have told Dr Mahathir.

Hey, just look at the guy, okay. He's plain creepy and I think all young and old handsome men should stay away from this Mcoba boy. 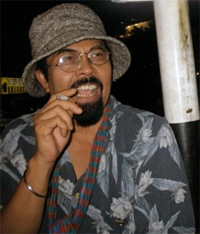 Meanwhile, on another matter, the


AG gets leave for contempt proceedings against Guan Eng


I think they are really going to get him this time.

Or at least they can make him shut up for a while.

I know from a friend in his camp that those close with Guan Eng were worried about him.

So, all that were not just for show.

Guan Eng can actually ends up in jail again.


On yet another matter, last night I got a message from a friend asking me who is the MB meant by RPK in this story of his,


Of course I know who is the MB meant by RPK.

It's an old story, actually.

But I told my friend not to bother himself with such stories.

I'm not a big fan of that MB, but to float such an accusation against him, in my opinion was not fair.

And RPK did another posting about him just now as I'm writing this,


Guess someone really wants that MB to be thrown out.

Well, this is all very sordid.

How I wish that Malaysian politics is more matured.

Oh by the way, if I'm not mistaken RPK is also a Mcoba boy while the said MB is not.