So, they said the English of DPM DS Zahid Hamidi is not good enough.

They whacked him that, following his recent speech at the UN, it seems.

Well, I'm no big fan of Zahid, but in this case, I wouldn't worry too much if I'm him.

He's not an Englishman, after all.

He is a Malay of Javanese heritage like my father, if I'm not mistaken. Cool. 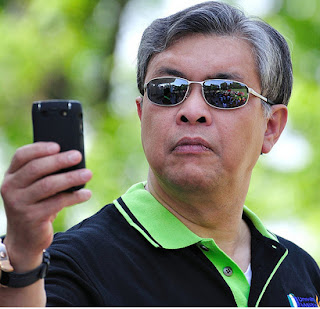 Why then should he be too bothered about such a complaint?

See, I'm not English too.

And I think my English is not much better than Zahid's.

You can read about people complaining about my English in this previous post of mine,

And as you can see, I just keep on writing in mostly English...if I may describe it as such lah.

For me, all that matter is for the audience to understand and appreciate the message I'm trying to convey.

Do people read my blog despite the said bad English?

Do they got the message I'm trying to convey?

I think the answers are YES....to a certain extent of course.

That's good enough for me.

Did the delegates at the UN understood and paid attention to what Zahid said?

I believe they did, despite his less than perfect pronunciation of some of the English words.

Hey, I even think that Zahid's grammar is even better than mine.

At least his English is not the Chinese sing song style of mine.

So, I don't think that's too much of a problem.

Nothing for us Malaysians to be embarrassed  about, okay.

Anyway, I don't understand why some people are so particular about getting our English perfect.

Especially so when they don't seem to be too concerned about perfecting their Bahasa Malaysia.

For the record, I don't care for either.

I just want people to sometimes listen and understand me, instead of praising my English.

I do however suspect that all those complaints were because those who made the noises think that form is more important than substance.

They prefer bullshit in perfect English rather than good argument in a "lesser" language.

And there's the ego thing too.

Some people are only good with their English. So when they lost an argument, they started to bitch about the superiority of their English over the other man.

Well, that's all they have, after all.

I encountered these sorts of people many times in my life.

"Oh, my English is so perfect, worship me," they seemed to say.

Next time Zahid talk at the UN, I suggest him to try this kind of English,

Zahid can mix it with his Javanese accent for all I care.