Thanks everyone, especially Australia

It has been almost a month now since MH370 went missing.

So it has been concluded that the Malaysia Airlines plane with 239 souls on board had disappeared over the Indian Ocean.

How the KL to Beijing flight had ended at that remote southern part of the ocean is still a mystery.

Search and rescue (SAR) effort is still on going and so far no trace of remains of the plane had been found.

PM DS Najib Razak was in Perth yesterday, where the SAR team is now based.

He had told the world that Malaysia will not give up looking until it's certain what had happened to the plane.

Najib had also conveyed Malaysia's appreciation to all 26 countries involve in the SAR effort, and members of the team who were painstakingly scouring the thousands of kilometers of ocean where the plane was believed to have crashed.

As mentioned by the PM, a special thank you was reserved for Australia and its government for currently hosting the SAR team in Perth.

Australian PM Tony Abbott, in particular has been great in his handling of the tragedy ever since the focus of the SAR shifted to the south of Indian Ocean off the coast of western Australia.

Today, there will be no more of the MH370 daily Press conferences in KL.  As was announced, Press releases will be issued to media organizations here of any latest development in the SAR effort.

The focus will now be in Perth as indicated in this report,

It was indeed a sad ending to another phase of the tragedy.

As it is, the mystery of the plane's disappearance was yet to be solved. 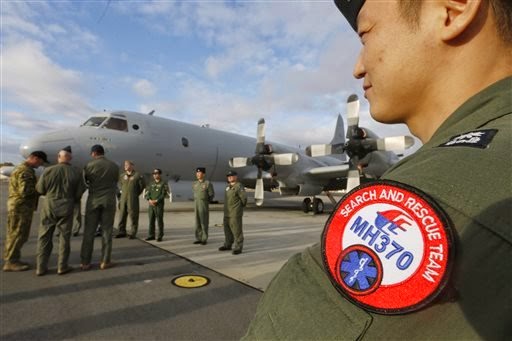 Let us pray for the safety of the SAR team members and their success.
Posted by Annie at 00:31