I had to take down my last posting due to technical difficulties.

I was alerted of it by a commenter who wrote this

Annie, what happened to the three pics; they're not showing ... on Apa lagi Bumis Mau?

I had tried to fix it but was unsuccessful. The pictures just refused to stick.

I will get help and once it's fixed, put the posting back on.

Drove down from KL early this morning with my mother and aunts.

We are back in our kampung for Qingming. 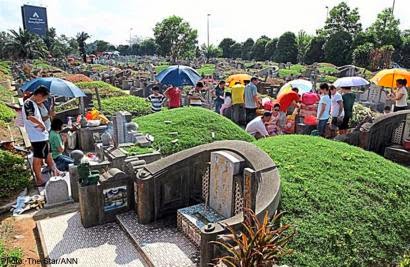 I have joined my Chinese relatives for the Tomb Sweeping Day since I was a kid.

My mother took me along with her for the occasion despite objections from some Muslim friends who felt that it's against Islam for my mother and myself to observe Qingming.

My mother told me not to worry as we were just paying respect to our ancestors and not praying at the graves. Something like what other Muslims do when they visit the graves of dearly departed on Hari Raya morning.

My father doesn't objected to it even though he never joined us.

What I appreciate my father most about the whole thing was that he never tried to turn my mother into a Malay.

My mother once told me that when she converted to Islam and got married, it was my father who insisted for her not to take up a Malay name and put a "binti Abdullah" at the back of her name, much to the displeasure of the Perkim and Jabatan Agama people who advised her to do so.

I believe that my mother made a point to retain her Chinese identity because she had married my father against the wishes of her family. It sorts of lessen the burden of her family to accept the fact that she is now "different".

For Qingming, everyone were back here, including my relatives from Singapore. Among them were my favorite big auntie and small auntie. It's almost like a mini New Year celebrations.

I am going to help around with the cleaning up of the house today. I can't help with the cooking as there may be pork among the dishes. My mother and myself have our own pork-free meal arrangement.

Later in the afternoon, I'm going to drive my grandmother to town to do a bit of shopping.

We will visit the graves tomorrow.

Here is a bit of lesson on Qingming