An organization of excesses in Johor

A journalist friend who is a fellow Johorean called me after reading my plea,

He advised me not to get too involved with the "situation" in our home state..

"It's not worth it. You will just get yourself in trouble," he said.

"They would not give a damn anyway," he added.

Well, I have to do something.

That posting was the least that I can do.

I know it's not going to get the prime minister to hurriedly fix things in Johor. It's not in my wildest dream to think that Datuk Najib reads anything that I wrote in this blog.

My only hope was that one of his media handlers who monitor the blogs would conveyed to him my worries about my home state and my belief that he could do something to stop the rot.

Then maybe the prime minister will do something. Who knows...

At least at the end of the day, I can take comfort that I did try to do something to save my beloved home state.

For those who doubt the veracity of what I wrote about the scale of excesses which are happening in Johor right now, please ask those who are familiar with what are happening down in JB.

Also, check with them whether it's true that those excesses had even spread among people who have been entrusted with ensuring the welfare and development of the state at the lower levels.

For example, you may check whether there is an organization in Johor which exploits were such as I listed here:

1. An organization set up by the government to bypass the civil service with the objective of ensuring massive developments take place in an area in southern Johor. Those who work for this organization earn up to three times more than the civil servants who perform similar tasks as them.

2. It's not a very competent organization. For an example, one of the organisation's favorite project was to install multi-million ringgit security CCTV system all over JB but after years of talking about it, has failed to do so. It's latest attempt at doing so ended with it being conned by its own appointed contractors.

3. The top guns of the organization seem to like going on "familiarization trips" which involves stopovers at golf courses in Indonesia. Occasionally, they would go elsewhere such as the recent "learning and development trip" to UK and other European countries which costs millions of ringgit but didn't produce any tangible result or knowledge sharing.

4. From 2010 to 2014, the organization spends RM240 million on "operational expenses", which many believe were spend on petty projects given to a bunch of businessmen who once went to the same all-boys boarding school.

5. The organization was supposed to be the prime mover of the JB Transformation Project but has failed to move anything after a year from the given deadline. I doubt the project which was meant to turn JB into a beautiful garden city of sorts will ever be realized.

6. The organization was supposed to provide opportunities for the bumiputera community in southern Johor. It was to uplift their living standard in line with the rapid development there. It had however failed to do so with efforts made towards that objective being what the Malays would described as "melepaskan batuk ditangga". It will be interesting to see what actually happened to the allocations provided for the organization's bumiputera projects if the government is to send in an independent auditor.

8. Many high ranking staff of this organization are Pakatan supporters who despite justifying their political views on what they claimed as a corrupt BN government, practice corruption themselves.

9. The CEO of this organization has a Ferrari, two BMWs, a Mini Cooper, a Range Rover, a Hyundai Sonata and two Japanese-made luxury cars. He also has over 10 significant private properties worth millions of ringgit

Well, there are a lot more I can put in the list but I think 10 is enough for you all to use as leads. It's up for you all to do a bit of research and asking around to find out which organization it was that I'm writing about. That would be more fun then me spoon feeding you all everything.

Okay, I give you a bit more of a hint. Hang around this makan place in JB for breakfast and you will know what I am talking about. 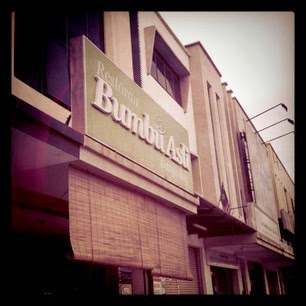 As they always said, the rot starts  from the top.

Sadly, many people will do the wrong things because they saw their leaders did that and got away with it.

The thing is, IF YOUR BOSS EAT SHIT, DO YOU WANT TO EAT SHIT TOO?

The excesses at the top in Johor will have a chain reaction all the way to the bottom of society in that state.

It is already happening now.

If nothing is done to rectify the situation, then I think that's the end of Johor as we know it.

We can also later on at the next general election say goodbye to Johor as the "tiang seri Umno".