I was trying to sleep early just now but have not been able to do so.

Decided to do this posting instead.

Okay, the country's political scene at the moment is rather dull.

It's dominated by the hudud issue, which is not exactly a new thing.

It's a subject which I actually rather not discuss.

It's because if I write what I truly feel about the whole thing, the comments section will probably be inundated with calls for my head to be chopped off for being a heretic.

Normally, I wouldn't care less about such things written by the commenters but of late I feel that I need some peace of mind.

After all, as far as I am concerned, the whole thing was just a Pas' attempt at winning back the Malay support which it lost due to the party's bending backward to win the approval of DAP and its solid Chinese support.

It's actually just a gimmick. Pas was hoping for Umno to reject the private bills for hudud to be implemented in Kelantan so that they can point at the rival Malay Muslims party and as usual accused it as being the one standing in the way of Islamic law being enforced in this country.

Of course Umno has its obligations to its non-Muslim friends in BN and will not support the bill....that is, unless Umno feels that it's better to join up with Pas rather than sticking around with parties such as MCA whose over a million members refused to vote its own candidate and Gerakan, whose leaders openly spat on Umno and calling it a racist party.

But seriously, would you stand the thought of supporting something like this being sanctioned by our country's laws : 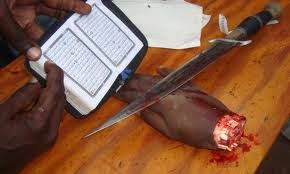 Is that really Islamic laws?

Guan Eng, your friends want to have such things in this country. So, you still want to be together gather with them?

Anyway, those were not what I really intended to write tonight. They were just a reminder of the hypocritical nature of our political establishment.

Well, never mind, I rather forget about it.

What I really wanted to tell in this posting is that I am starting to write a novel.

I had planned it for quite awhile and finally had completed its draft.

It's going to be based on the real life story of my father.

It's about a struggle for life, the most strange love story, deceit and betrayal as well as repentance.

Nope, it's not going to be one of those Malay romance novels made for drama to be shown on TV3.

I believe its going to be quite complicated and lengthy. There will be quite a bit of politics too, particularly Malay-Chinese relations.

I am also going to write it in English.

I will try to find a publisher, once I had done with the transcript.

If I can't find any, I will probably publish it in cyberspace for free.

As it is with this blog, money is not my motivation for writing the novel.

I am doing it just for my own personal satisfaction.
Posted by Annie at 00:09