PKR rattled that Anwar is facing a cute Chinese lady

The prospect of Anwar having to face a Chinese lady in a constituency with a sizable Chinese community apparently makes them a bit edgy.

Maybe they fear such a face off may remind the Chinese of certain things they rather want them to forget, So, they got their Wanita chief to come up with a statement like this :

Why did Liow Tiong Lai ‘run away’ from contesting in Kajang?

I think it's a rather stupid diversionary tactic.

Unlike Anwar, Liow is not hungry to be this and that. So, why does he need to be the MCA's candidate in Kajang?

Chew is after all a party vice-president. That's not big enough ka?

Come on la, PKR people should stop thinking that people are stupid all the time.

The only reason why Zuraida asked that silly question is just that they in PKR had discussed Chew's candidacy and they knew that the prospect of Anwar further exploiting Kajang had been diminished even if he wins because he is now facing a woman BN candidate.

They are sore that, instead of Anwar getting a "big man to big man" fight, he ends up having to fight a woman, and a Chinese one at that, which reminds people of certain thing about their main man of the opposition.

Anyway, whatever it is, when I look at Zuraida, I think I can understand why Anwar seems to be rather partial for pretty Chinese ladies in certain circumstances. 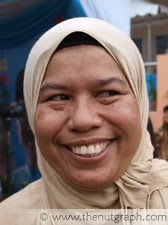 Not that it's an excuse for his behavior, though.

Well, MCA is having their extraordinary general meeting today. I am wishing them all the best. Hopefully they can get ALL their MEMBERS in Kajang to vote for their own candidate.

The Chinese must really avoid themselves from getting screwed by Anwar.
Posted by Annie at 07:06