Let it be a total BN boycott in Kajang

He had also on Chap Goh Mei and Valentine's Day distributed roses to the ladies during his walkabout in the constituency.

However, I don't think all that are going to work at all.

I believe DS Anwar Ibrahim had made all the necessary calculations that he is going to win one way or another.

Kajang is after all now a Pakatan stronghold and the guy has been going on an all out campaigning mode from the word "go".

Liow, should know that this is true.

He knows that if MCA is going to fight, it will be at most, just a face saving mission and nothing else.

In the first place, Liow should ask his people in Kajang : how many of MCA members there, are going to vote for the party's candidate?

Then he should ask : how many per cent of the Chinese voters in Kajang are going to vote for MCA?

Well, I believe that's about what the MCA candidate for Kajang got in the last general election.

Out of the over 12,000 votes that the MCA guy received, the bulk are from the Malay voters.

By the way, the PKR guy had about 19,000 votes, with the Chinese who made up about 40 per cent of the voters there almost solid behind him.

Had things changed in Kajang since May last year?

Previously, I did say that MCA should fight. That's because I was horrified that some numb nuts whom I believe were from Umno think that it was funny to field an ex-pimp of Anwar in Kajang.

I thought even if MCA loses, which it will, at least the Kajang folks are not going to be insulted by the farce.

Now things are a bit different.

Zaid Ibrahim, who was once touted by PKR as an alternative prime minister candidate to Anwar had offered himself as a candidate there.

He had yesterday gave the middle finger to PKR secretary-general Saifuddin Nasution for suggesting that he was sponsored by Umno.

I may not like Zaid much but at least I know that he is not much of a hypocrite compared to Anwar.

When once confronted with his past drinking habit, Zaid bravely admitted it.

Not many Malaysian politicians dare to do such things.

The only other person who came to mind was former MCA president DS Dr Chua Soi Lek who admitted to his sex video scandal.

Anwar would simply deny such things even though the evidence was as clear as day light. As we all know, he had already done that. 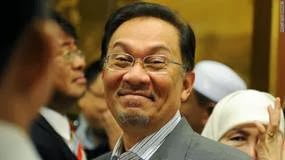 "Nope, I never fucked the country or anything or anyone else. This is Umno's conspiracy," he would said.

Anyway, I think Zaid going to lose too.

But it doesn't matter. At least the Kajang people will have an alternative who was not a pimp of the fucker who imposed the by-election upon them.

If MCA is still itchy to campaign, they should go down to Kajang to ask the BN supporters there to boycott the by-election.

Umno and the other BN component parties should do the same.

It should be a total boycott by BN.

Let the Pakatan supporters be the only voters who turned up on polling day.

The rest of Kajang should not waste their time and energy. They should continue with their lives as there are more beneficial stuff to do than entertaining the likes of Anwar and his gang.

After all, there are more to life than politics.

Such a boycott will send a clear message that decent Malaysians have had enough of the political nonsense that have been dragging on since almost 10 years ago.

What Malaysians really need now is for the country to move forward with its nation building efforts instead of being bogged down by the political negativities of ambitious but useless people like Anwar.
Posted by Annie at 06:38