I was waiting for the Umno's brilliant young cyber generals to reply to this Malaysian Insider's editorial but it seems they are a bit slow.

So, here goes, my amateurish reply to it.

This is the introduction paragraph of the article,

In the throes of Malaysians debating the correctness of Datuk Seri Anwar Ibrahim contesting the Kajang state seat, comes a stark reminder that evil resides in Umno. 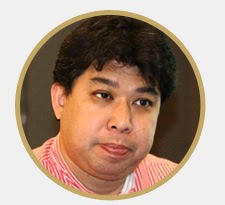 Or is that you, Lionel or one of those ex-crime reporters from NST now manning the Malaysian Insider's political news room?

Next time put la your by-line properly, so that I can applaud you by name.

Okay, for those of you who really got nothing to do and want to waste your time reading some trash editorial piece, you may find the rest of the article here:

For those who are too lazy to go to the link, let me point you all to these paragraphs of the article which you may find interesting,

From Perlis down to Johor, every trick in the book has been employed against the opposition. At times, the royal households are used, sometimes the religious authorities are co-opted.

Often, laws are bent to suit the whims and fancies of Umno.

So it seems to be the case in Kajang where Anwar was barred from giving the tazkirah (a short speech before the Friday sermon) at the Impian Saujana mosque in Kajang on orders from the Selangor Islamic Affairs Council (Mais).

So, according to Malaysian Insider, Umno is in control of Mais, despite it being an agency of the Pakatan Selangor government.

That's why according to the author, Mais didn't allow Anwar to talk about how sexy he was in the mosque in Kajang. Very smart indeed.

The person who wrote the editorial acknowledged that there is a law against allowing just anyone to use a mosque as a place to give speeches, but still, he or she thinks it is Umno's evilness which is causing all the problems.

It never seems to occurr to the author of the Malaysian Insider's editorial that the Mais guys may just be doing their job of enforcing the law.

I guess the person who wrote the editorial wants Mais to allow every nut case or power hungry politician to use the mosques in Selangor for whatever nonsense they want.

Or at least, that's how it should be as long as the monkey who wants to give the speech in the mosque is from Pakatan.

Otherwise, it's the evil Umno at work.

Well, so much for independent, balanced, and ethical journalism.

Once Pakatan takes over this country, this is the kind of journalism which is going to be practiced by the media people of this country.

The Malaysian Insider never even bothered to check with Mais, what the whole bloody thing was all about. Mais was not even given the right to reply.

And I don't want to even get into the Malaysian Insider's allegation that Umno had even used the royalties for its political agenda. I leave that one for you all to decide.

Bear in mind that this piece by Malaysian Insider is an editorial and not some crap commentary written by one of their guest writers.

That's the standard of that supposedly free, fair  and independent news portal.

Okay, that's all from me.

For additional reading, please go to the websites run by the Umno young geniuses in charge of the party's cyberwar room.

I am sure you will get better write ups there on Umno's reply to these sorts of trash by pro-Pakatan portals.

Which are the Umno portals run by these brilliant young people? Errr....actually, I also don't know.

Please call the Umno HQ for the website addresses. Thank you.
Posted by Annie at 23:13