Well, Perikatan's offer to BN came too late and now Anwar is the PM.

Yup, they were just too slow.

If they have become the government, they would also be too slow.

Exactly why I had in my previous posts said Pakatan would be a better government than Perikatan.

Lesser of two evil in that matter.

I'm disappointed though because reports so far indicated that BN will join the new government.

I was hoping for BN to be in the opposition.

Just not right for losers of a general election to be in the government.

But that how it is going to be.

The Pakatan supporters are celebrating now.

However, I don't know how they are going to react once Anwar revealed to them what concessions were made to BN.

I know though that half of BN, especially Umno are not happy with their party's decision.

Zahid, who was responsible in helming them to their worst election defeat in history was the driving force behind the cooperation with Pakatan.

Yup, that Zahid who Pakatan and Perikatan people said is a corrupted crook. 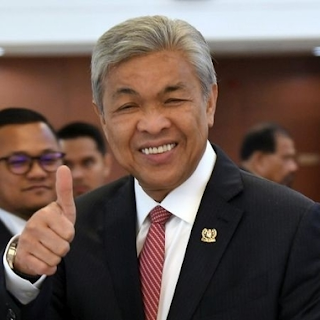 If the unity government is truly the saviour of Malaysia, then by right Zahid should be hailed as a national hero.

But of course that would not be the case.

By the way, there's a rebellion brewing within the Umno ranks against Zahid and the party's election would be just around the corner.

If Zahid is defeated and kicked out by Umno, this unity government will be in trouble.

So, Pakatan, through its connections with rich guys around the country should do something to help Zahid.

You all said what, Umno can be bought.

Anyway, I don't believe Zahid will now be convicted of those corruption charges too.

And I think Najib will get a royal pardon, just like Anwar previously.

I know, I know. Rule of law. They all said that lah.

What? You all angry that I said that?

Hey, you all want reconciliation or not?

Najib could in fact help Zahid put down the impending Umno rebellion and saves the unity government.

Umno also needed to be revived to stop the Malay conservatism that has swept the country with the rise of Pas during GE15.

Umno is the main Malay party of Pakatan now.

Even DAP should know this.

The one they have now called Amanah would not be able to stop Pas.

Okay, we don't know for sure yet the details of this unity government, so I don't know how much Pakatan was willing to go in the effort to tie the knot with BN, particularly Umno.

Once I know that, I'll write again.

Anyway, I wish DAP could offer an apology to Umno like what it did to the Sarawakians.

That would strengthen the unity government quite a lot.

But of course not, DAP has its pride too. Apologising to Umno would be too hard for them.

Still, they need to remember, if not for Umno, they would be living under a truly Malay Islamic government headed by Pas.