A friend who is not familiar with Johor politics asked me about Maulizan Bujang last night.

Attempts to bring back Zahid to lead Umno not good

Since it was not the first time I was asked about Maulizan ever since he made that statement, I think I better write a bit about the guy.

I know Maulizan since when I was in Johor. 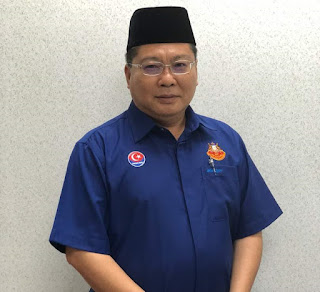 He is a good guy and I like him. Very straight forward and quite idealistic. He also works hard for the party.

His brother, Mazlan who is now the Johor Pribumi Bersatu chief is a bit like him.

I met Maulizan several times in group discussions not long after GE14.

He was all fired up to get Umno, particularly in Johor up and running again.

The guy was very vocal about it.

What I like most about him is his sense of independence.

He doesn't seemed to be tied up to any "master" in the party.

He was among several Johor Umno division  chiefs who advocated the idea for the state to have an early state election before GE14 in order to avoid being dragged down by the weight of national issues plaguing BN at that time.

Maulizan and the others believed that Johor could be saved that way but their idea was killed off by then MB Khaled Nordin and his people.

Anyway, what was clear from the discussions is that as far as Maulizan is concerned he wanted a total overhaul of the party.

He wanted Umno to have a new image and for him it's better for leaders who have become liabilities to the party to step aside for others to take over.

I met Maulizan again several months later in another group discussion after the last Umno election and his stand appeared to be still the same.

His views about the party's rejuvenation process was supported at the discussion by several other Johor Umno division chiefs, who were mostly newcomers, fresh from winning their posts in the party election.

They all wanted the party to move forward by offloading its baggages.

But at that time Umno appeared to be still floundering despite the new leadership line-up and I can sense their frustration as the party appeared to be stuck with many old faces at the highest level.

I have to admit that I felt the same at that time.

Things however turned for the better later when Zahid, who was facing multiple charges in court decided to concentrate on clearing himself from legal troubles by handing over his duties as party president to his deputy Mat Hassan.

With that move, Umno suddenly looked fresh and capable of moving forward again.

Credit should go to Zahid for willing to step aside, allowing the much less encumbered Mat Hassan to lead.

If only other troubled Umno leaders had done what Zahid did, I don't think the party would have suffered the humiliation of GE14.

Yes, the other leaders include Najib.

Once a leader has become a liability to the party, whether he's guilty or not, he has to go for the sake of the party.

True enough, under Mat Hassan, Umno and its BN allies,  as well as Pas regained their ground by winning three by-elections in a row.

Mat Hassan did and said everything right. He even projected the right image as the top Umno leader.

Of course the fact that Pakatan screwed up so much also helped the cause.

I can imagine the elation of Umno people such as Maulizan and those new division chiefs who wanted so much for the party to change.

It must be the same for the grassroots of the party.

Suddenly they can hope again for a better future after those dark early months after GE14.

And when hints that Zahid wants to take back his role at the top of Umno started to resurface lately, many were worried that the momentum will be reversed.

I believe that was the only reason why Maulizan made his statement against Zahid.

Knowing Maulizan, I don't think he wanted anything but the best for his party and at the moment he believes that Umno is better being led by Mat Hassan than Zahid.

Personally, I have to say that I agree with him.

Whatever it is, I hope the Umno guys will do what is best for their party and also try not to tear it apart while doing so.

They must always bear in mind that their real fight is not among themselves but with Pakatan people.

If they can put their party's interests above their own personal interests, then I believe they will eventually win the fight.
Posted by Annie at 12:43