The PM knows about that
controversial land deal in Melaka

He even put a copy of the letter from SDP group chief executive Mohd Bakke Salleh to Dr Mahathir.

SDP CEO TS Bakke Salleh had then wrote to PM, Dr Mahathir on the matter but nothing came out of it.

Well, some tried to spin the whole thing to pin the blame on the previous BN government but that's not working because the whole nonsense certainly belongs to the Pakatan's state government in Melaka.

Why Dr Mahathir did nothing about it?

Honestly, I don't have a sure answer to that.

Maybe it's because the Melaka CM is an Amanah guy and not from his party.

I'm quite sure Dr Mahathir would have done something if the CM is from Pribumi Bersatu.

He did that in Johor.

Of course that Johor MB affair was messy and still unsettled until today but at least he did something about it.

Seriously, I don't think Dr Mahathir has much say as to how leaders of DAP, PKR and Amanah conduct themselves.

That's why I think he did nothing about the Melaka land grab issue.

And even if he wanted to do something, he can't.

Back then when Dr Mahathir was a BN PM, he had total control and could steer the nation to greater heights. 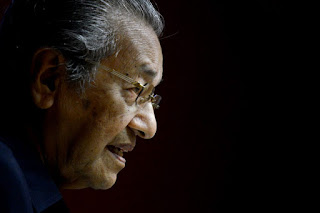 Okay, I can understand if he doesn't have any say about what DAP and PKR people do.

After all, DAP is the dominant party of Pakatan while PKR is the party with the most number of parliamentary seats in the coalition.

But for Dr Mahathir to have no say over the conduct of even Amanah leaders such as in the Melaka land grab issue is really unfortunate.

Amanah is almost as junior as Pribumi Bersatu in Pakatan, and Dr Mahathir as the PM can't even stop its leaders from abusing their power and punishing them for it.

Well, nothing much we can do now except just wait for Anwar to take over from Dr Mahathir as PM next year (hahahaha....as if it's going to happen).

Who knows maybe Anwar can do what Dr Mahathir can't....control over all the Pakatan component parties.

After all, PKR is a bigger and older party than Pribumi Bersatu.

Somehow, suddenly I find it hard to swallow that Anwar may be more capable than Dr Mahathir in handling all these problems.

Whatever it is, bear in mind that no Malay leader, either Dr Mahathir or Anwar can control or have any say about what DAP leaders are doing.

They are the real gang in charge.
Posted by Annie at 12:39