The tide may be turning

Been busy the past few days and had no time for this blog.

Today, I just want to tell you all that my friends who are campaigning in Cameron Highlands told me that BN may have a good chance to win the by-election.

They said BN has so far not making any wrong move and their campaign, especially the fielding of the non-party member Orang Asli candidate have been very well received. 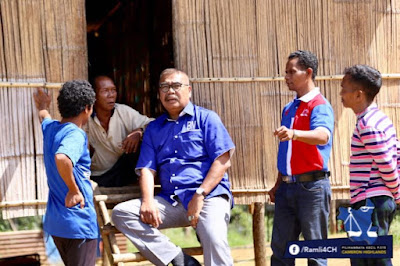 Well, I don't know lah how true are all those because I'm not there on the ground.

Wish I could be there, but I'm quite tied up with things in KL right now.

Honestly, I'm skeptical that BN could bounce back from the GE14 defeat just eight months ago to win anything, let alone a by-election.

But my friends insisted that things are different this time.

They said Umno for instance seems to be more stable now ever since Mat Hassan was made the acting-president following Zahid's decision to "take a rest" after he was slapped with multiple corruption charges.

On this, I have to agree with them.

Mat Hassan seems to be the slow and steady type. My perception of him is that he is more of a kampung Malay type of a leader with minimal flash and glamour.

That I kinda like of a leader as I always believe that a leader who talk less tends to be more of a worker.

At the moment, Umno needs a leader who works instead of one who talks too much.

And I think Mat Hassan must have played a big role in the decision to field Ramli, the Orang Asli candidate in Cameron Highlands.

I also think that the best that happened to BN in Cameron Highlands was the ability of its component parties, particularly MIC to agree with the decision.

Maybe all the knocks they suffered the past eight months had put some sense into their head.

Yeah, maybe the worst is over for them.

Those who were accused of corruption are already starting their time in courts, the disloyal ones had jumped ship (though many are now floundering in the water because they were not accepted by Pakatan), and attempts to totally destroy BN and Umno so far have failed.

I think they have hit rock bottom and can't sink any lower.

Well, at this point, I think Umno and its few remaining loyal friends in BN can seriously start the rehabilitation process.

Maybe if they could snatch victory in the Cameron Highlands by-election, it could be a turning point for them.

Furthermore, I also think that the people are beginning to see the failings of Pakatan government in so many fronts now, especially its inability to fulfil its election promises.

Even the prices of goods and services have not improved for consumers these past eight months. Lagi naik harga ada lah.

Then there's the quality of Pakatan ministers which is so teruk. Honestly, Ahmad Maslan seemed so much cleverer than Teresa Kok these days. Really, I'm not kidding you. Hectare and acre also not sure which is which, how?

Okay, let's not even talk about the racial issues this time. I have to admit that I'm a bit tired of people calling me a racist for highlighting those.

But seriously, I don't think Pakatan can keep on selling the same BN ghost stories as before GE14 till the next general election.

Eight months and people are already tired of those stories. Najib and the others are already at the courts now, so nothing to stretch from them.

Now the people just want a better government than the previous BN one. At the moment, they are not getting it. They can make all the zero corruption claims about the new government, but those are just that - claims.

Anyway, I think it would be good if Umno and its friends could really be strong again as we need a strong opposition to keep the Pakatan government on its toes.

At least the time when people are just simply swallowing all the bullshits will be over.  That's what democracy is all about, I believe.
Posted by Annie at 13:04