Whatever it is, we still need a good opposition

The Cameron Highlands by-election is tomorrow.

I'm betting on a BN's victory.

This is so because BN has till this moment not made any mistake during campaigning while Pakatan did so on several occasions.

For instance, there's the Lim Kit Siang's stupid offer of full citizenship to the Orang Asli community, his son's veiled threat that there may be no new development for Cameron Highlands if Pakatan fails to win and the over emphasis on wining non-Bumiputera votes as I highlighted in my last two posts.

I think such arrogance was not good for Pakatan.

Still, most of my friends, including the pro-BN ones said Pakatan will win.

One of them even believed that the Election Commission under Art Harun will make sure a Pakatan's victory.

This is so, he said because Art Harun is running EC on his own and can do as he pleases.

Well, I know la that Art Harun is more inclined to Pakatan, but I don't think he'll do such a not nice thing.

The guy also needs to take care of his reputation as a champion of these and those, isn't he?

Meanwhile, another friend, who used to be a staunch Umno supporter said he hopes BN will lose.

"Let Umno die. It's too corrupted to be salvaged," he said.

I was a bit surprised as he's not an Umno turncoat and was supporting BN all the way till its defeat in GE14. The guy is good and not involved in any hanky panky throughout his years with Umno.

But I understand my friend's frustration because he was part of the Umno machinery for a long time and saw how the party degenerated to what it is now.

I think he lost faith in Umno after the post-GE14 party election which results indicated that the party refused to change.

I didn't tell my friend to change his mind except asking him to be patient.

After all, we still need an opposition for our democracy to stay alive and Pakatan , as proven over the past eight months is not any better than BN in so many aspects.

And maybe Allah makes Umno and BN lost GE14 so that they could be reformed.

The signs were slow to come but they were there, especially after Zahid gave way to Mat Hassan to lead Umno. 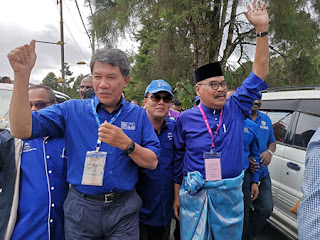 How Umno and its BN friends conducted themselves while campaigning in Cameron Highlands is also a good sign.

If they can win the by-election, then I think there will be a good chance for them to turn the tide.

They may have learnt their lessons and be better for the future.

Well, maybe they could even win the next by-election in Semenyih.
Posted by Annie at 13:06