I'm honestly not very keen to comment on the resignation of Yang Di-Pertuan Agong because I don't think it will make much difference to the overall scheme of things.

However, my best friend from Kuantan forwarded these stuff she picked up from social media and requested for me to highlight them in this blog. 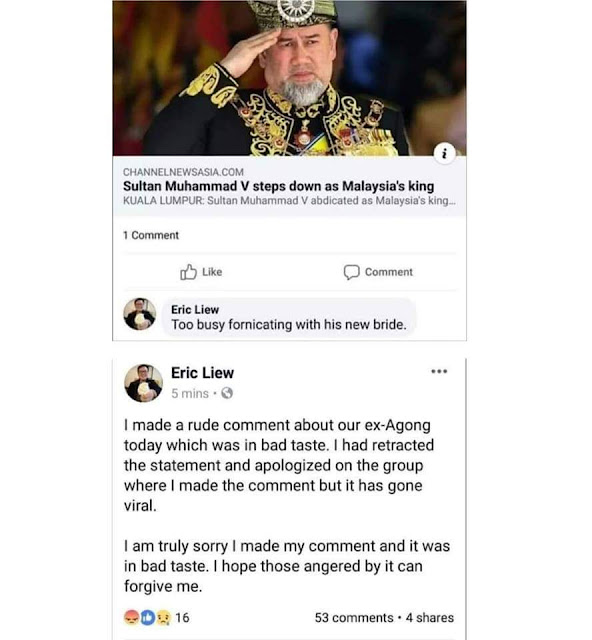 The only mainstream news portals that reported on this were the Malay dailies.

I guess The Star didn't deem it newsworthy either because plenty of people over there agree with this Eric Liew chap.

This is a clear example of how some non-Malays belittle and mock the culture and institutions that Malays hold dear.

Although the Council of Rulers have their reasons to persuade His Majesty to abdicate and acknowledge & accept his stepping-down, it's in bad taste and highly disrespectful to utter such statements towards an outgoing King.

We may not be as extreme as Thailand with lese majeste laws, but neither are we a republic with toothless monarchs.

The bigger issue here isn't about one person making a disparaging remark against an outgoing monarch, it's about how this is being seen as yet another example of an important Malay institution being trampled with impunity by those that have absolutely no respect for the feelings and sentiments of the majority.

The slower the current government takes action against this case, the more they will be seen to be anti-monarchy and anti-Malay.

This association is not entirely true, of course, but politics is more about perception than truth, and Pakatan should know it better than anyone.

Being the government of the day, it's a significantly more difficult task to appease and manage the perception of the masses than to communicate the right things that you've done.

Previously, when the topic of reverse discrimination came out, many non-Malays on social media and various local forums vehemently denied that there were incidences of non-Malays insulting and disrespecting the royals.

Now, when this Eric Liew issue came up, I'm also seeing many comments from these people in support of him, and stating that the royals are a waste of taxpayers' money.

Incidentally, social media is also full of screen captures of many non-Malays insulting the YDP Agong with worse statements than Eric Liew.

It appears that it has become a hobby for some people to stir up Malay sentiments in order to accuse the Malays of being an angry backward crowd when they do react.

No wonder Mahathir is confident of turning Malaysia into a republic.

With so many "Malaysians" that have no regards for our system of Constitutional Monarchy, with no knowledge nor respect for this country's history and the roles of the sultanates, these people will cheer Mahathir's move to further curtail the authority and discretionary powers of the rulers, thus effectively removing yet another pillar of check-and-balance in our Federation.

To the Malays who are in support of a republic, think carefully before you leap. The YDP Agong's discretionary powers are what's keeping Article 153 relevant and in force.

To the non-Malays who are in support of a republic, let's remember that the sultans and YDP Agong have been a vocal force of moderation and stability in recent years, speaking out against the extremists and questionable politicians, and assuring all of us that the royals are looking after everyone's interests.


Well, I don't think I have more to add to those.

Some people went around insulting others, and then just said sorry and expect all things to be okay.

But from experience, they will do it again as they believe they can get away with it as nothing happened to them the first time.

That's the trend these days in this Malaysia Baru.

They even bashed up a fireman who was trying to do his job to death just for the fun of it and expect nothing to happen.

And they expect us not to even say anything about it being a race hate crime.

Ya, I will always remember that.