Met an old friend for tea the other day.

The guy occasionally invited me for lunch or tea just to chit chat.

It turned out that he was not very well and just  had an appointment with a doctor before meeting me.

Despite him being very much older than me, it was the first time I saw him being less healthy than myself.

If he had told me about his condition, I would have declined his invitation so that he could rest.

Still, it was pleasant seeing him.

As usual, we talked about current issues and politics.

He was quite unhappy with the way the current government handles itself.

By the way, my friend was considered to be one of the best young ministers in Dr Mahathir's Cabinet in the 90s.

So, he knows quite a lot about the difference between the administration at that time and the current one, even though they were led by the same man.

"These days, everyone wants to talk. Some ministers talked so much that they ended up talking about other ministers' portfolio....even the junior deputy ministers talked as if they were ministers themselves. And they don't care about things such as the secrecy policy," he said.

I asked him about this one,

The Kuantan member of Parliament said she was informed of the decision reached at a Cabinet meeting today following suggestions from the Ministry of Energy, Science, Technology, Environment and Climate Change.

"I'm quite sure Dr Mahathir would have been very angry about that. Who is this woman to tell the world that she knew about what were discussed by the Cabinet. Back then during my time in the Cabinet, Dr Mahathir was very strict about the confidentiality of the Cabinet meetings," my friend said.

I was actually wondering why it was Fuziah of PKR and not the DAP minister Yeo Bee Yin who made that claim to the public.

Is it because Yeo needed Fuziah to handle the Lynas workers who are mostly Malays? 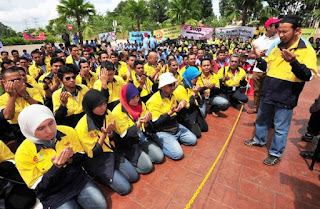 Yes, the Lynas workers whom Yeo had refused to meet.

I did imagine if the workers are mostly not Malays, maybe Yeo would not be so sombong.

Maybe she would not even be too eager to shut down the Lynas plant after the review committee that she herself appointed had said that it doesn't pose any danger.

I also asked my friend what does he think about the way things are ever since Pakatan took over the government.

"We are undergoing a new phase of colonialism. This is a Malaysian Malaysia colonialism," he said.

My friend argued that supporters of the ideology which primary aim is to deny the special rights of bumiputera as enshrined in the constitution are now poised to reshape the country.

"They are very smart and are now in control of the country's finances and communication. They will slowly but surely shape things as according to their wishes," he said.

My friend added that the process of shaming the bumiputera for what were their rights have already began.

"They want us to be ashamed to claim our rights.

'They want us to give up everything that are ours in the name of racial equality but they would not let go of theirs such as the vernacular schools.

"They can call us all sorts of things but we can't say the same about them,. If we do, then we are racists. That's the way things are now ," he said.

In a way, I think my friend was right.

Nowadays, it seems okay to openly describe the Malays as lazy or by any other negative character.

But if you try to point out that a Malay Muslim fireman was murdered because of his race and religion, then you are bound to be branded as a racist....even by people you thought are your friends.

After all, Malays are supposed to be meek and accept anything said about them with a smile.

Well I did try my best to be that, actually.

When someone shouted at me the other day, calling me a racist and other not so nice things, I just smiled and pretended to be okay.

Well, that's better than me beating up a fireman to death, like what some other people did, isn't it?

Whatever it is, I don't think the Malays and other bumiputera should complain too much about all these because they are also responsible in choosing the current government.

So, maybe this Malaysian Malaysia colonialism is not so bad.

This country was colonised by the white men for hundreds of years before this and the Malays and other bumiputera survived it by being farmers, labourers and such.

Probably they will be okay being like that again.

After all, they were said to be lazy and all the other negative stuff.

Not the right material to be lawyers, doctors, prime minister and such.

Well, that what was said lah.

Maybe after a few hundred years there will be another Merdeka and they can have another go at having their dignity again.

Who knows, maybe the weather changed by then, causing the Malays not to be lazy anymore.

For instance, maybe they need to change the name of the country. The Malay part may sounds too racist.
Posted by Annie at 03:24