A friend who is campaigning in Cameron Highlands sent me this picture just now, complaining that this election billboard doesn't have Bahasa Malaysia on it, 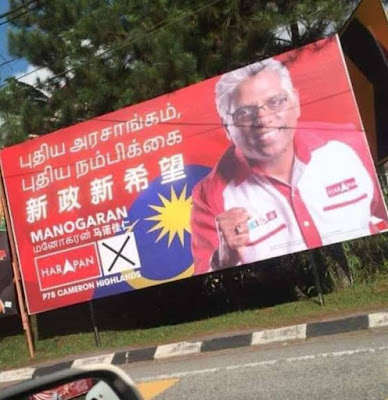 Ya, it's quite weird.

They should have at least put something in English if they don't like Bahasa Malaysia so much.

This is as if the Pakatan candidate doesn't want the votes of those who can't read Chinese and Indian writings.

Maybe it's just an oversight. A lot of those by Pakatan  in this Malaysia Baru.

Whatever it is, I think Pakatan shouldn't keep on doing these sort of oversights as it gives negative impression on the people.

I know lah Pakatan now is very strong and can't seems to do any wrong for some people, but that shouldn't make them too arrogant.

After all, Bahasa Malaysia is still the national language.