Let the Malays and Bumiputera people gather on Dec 8

Muhammad Adib was not hit by fire engine

Basiclly, the IGP was saying that the claim by temple people on how Muhammad Adib had suffered his injuries was not true.

Ya lah, for one thing, how can they said the mob were chasing and merely "tapping" on the retreating fire engines to stop them from dragging Muhammad Adib when the video clearly shows that the whole gang were attacking the vehicles.

Just look at the condition of the fire engine which was "tapped" by the "devotees". 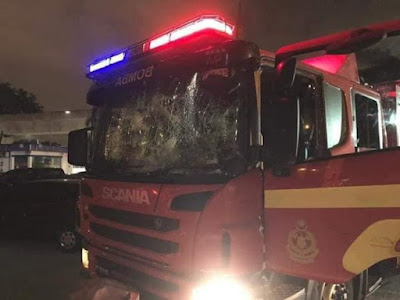 And I think even if you ask Khabib what he thinks of the temple people's claim, I'm quite sure this would be his answer,


Meanwhile, the second part of the story yesterday was about the planned anti-ICERD gathering on Dec 8.

In another development, Mohamad Fuzi said police had yet to approve the rally pertaining to the International Convention on the Elimination of All Forms of Racial Discrimination (ICERD) that is due to take place in the federal capital on Dec 8.“They (the organisers) have submitted the application ... we have called the organisers. Thus far, we have yet to give the permit as we need to carry out safety assessments, apart from the fact that they are also required to obtain approval from Kuala Lumpur City Hall (DBKL),” he said.

Personally, I think the authorities should let the gathering be held.

After all, the organisers had decided to hold it at Padang Merbok and not Dataran Merdeka after the government decided not to ratify ICERD.

After all, what's wrong with the Malays and Bumiputera people gathering like that to state their stand on what they claimed to be their rights.

It happened before and there was no disturbance....unlike when other "peaceful rallies" were held such as this one 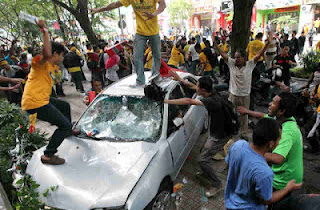 or "peaceful gathering" such as this one, 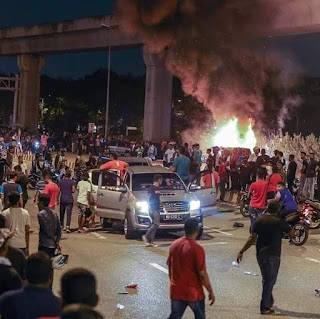 I know that some Pakatan leaders and their bloggers had called for the anti-ICERD gathering to be stopped but I can't see why they were so worried about it.

I'm used to be against rallies too but now even Dr Mahathir and other leaders are actually okay with rallies. 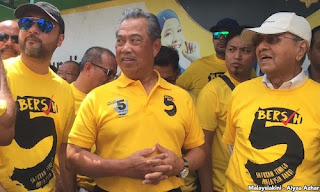 In fact I'm hoping for Dr Mahathir and the other leaders to attend the gathering which was said to be for the rights of the Pribumi of this country as enshrined in the constitution.

After all, the name of their party is Pribumi Bersatu Malaysia.

So, what's wrong with a gathering of united Pribumi, right?

I don't think they should miss the opportunity as this gathering will probably be the first time the Malays and other Pribumi people will gather in true unity since 1946 when they opposed the Malayan Union which was to take away their rights, paving the way for this country's independence.

I'm quite sure it will be peaceful and no fireman will get beaten within inches of his life.

Furthermore, if this gathering is to be stopped, it could be interpreted as an attempt to muzzle the voice of the Bumiputera or even worse be deemed as a result of the temple riot.

So, I think the authorities should let the gathering continue but of course they should provide security as during all those Bersih rallies of the past several years.

Like that baru lah Malaysia Baru yang demokratik and mengamalkan dasar freedom of speech and expression.
Posted by Annie at 12:07