DAP should have defended Wan Hamidi

I sincerely felt sorry for Wan Hamidi when I read this,

I was initially offered Bernama 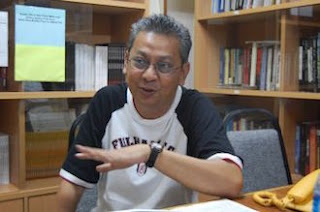 After being a target of lies, unfair condemnations and personal attacks for quite some time, I have been informed that I would NOT be appointed as the Bernama CEO. This is despite being initially offered, persuaded and convinced to accept this job at the national news agency.

My apologies but I won’t be replying to any queries. So please don’t waste your time trying to message me or call me about this. Now is not the time, sorry.

If you’re really want to know, perhaps you should you ask the Bernama Board or the Cabinet Minister(s), or those people and racial groups including some media and news portals that hate DAP. Perhaps they know more.

For those who didn’t know me (including those who had vilified me) let me share with you this info - I have 30 years’ experience in journalism and communications. I have worked with Berita Harian, The Star, The Sun, Straits Times Singapore, New Straits Times, and The Malaysian Insider, as well as DAP’s Rocket Publications.

I also had a stint with the Australian High Commission in Kuala Lumpur as its media relations advisor.  The last position I held was Deputy Director for Research for Social Advancement (REFSA), a progressive think tank.

Despite not being active in the mainstream media in recent years, I continue to write as columnist for news portals Malaysiakini and The Malaysian Insight. I have also written and edited some books.

For those who're wondering, I actually believe in free press and freedom of expression, although we know that in the Malaysian context, it's easier said than done. But we must never give up. We must keep on moving. So there.

I think it took quite a bit of effort for Wan Hamidi to write that FB post.

After all, the guy, as I know him, is rather quiet and unassuming despite his friendly demeanour.

It's a bit out of character that he pour out his feeling like that.

I guess the pressure was quite tremendous for him to bear.

For me, it's particularly unfair to Wan Hamidi because the story of him becoming the Bernama CEO had been going around for almost two months.

Why was he offered the job in the first place and by who?

It's highly likely because DAP wanted to reward him for his services to the party and that it's probably Gobind himself, as Information Minister who made the offer.

If so, I actually have no problem with it because it's only right that DAP, now in power, rewards him with such a post.

After all, I know that the guy had gone all out for his party. Wan Hamidi is a true DAP idealist, who really believes in the cause.

I don't know exactly how much DAP paid him as the editor of Rocket, but I'm quite sure it's not much.

So, really, I'm okay with him being the Bernama CEO and earn a bit more money.

After all, it's by right a post not related to Bernama's editorial policies.

Even if it does, I do believe him when he wrote this;

Knowing him, I think Wan Hamidi would try to keep Bernama free from political interference the same way I believe others would try to do as I highlighted in this previous post,


I know, he's a DAP operative, but I think he still have the idealism to do the right thing, especially when it comes to journalism.

Well, for one thing, I'm quite sure that Wan Hamidi is better when it comes to journalism than those who attacked him such as former information minister Rais Yatim who is now a Pribumi Bersatu strongman.

Yes, I still remember Rais' crackdown on bloggers when he was the minister. Their homes were raided and laptops seized.

And before you all start commenting on this, bear in mind that what happened to Wan Hamidi has nothing to do with Umno/BN.

Some of them did make noises about it but they have no power to stop Wan Hamidi's appointment, okay.

The ones who have the power to decide on this matter are Pakatan people.

It's them who played out Wan Hamidi.

Again, Gobind is the Information Minister who have control over Bernama. He's also probably the one who offered Wan Hamidi the CEO job.

How come Gobind didn't stand up for Wan Hamidi when the guy came under attack over the appointment?

If I'm Wan Hamidi, I would be angry at Gobind and the rest of DAP leadership for not backing me up.

How come they let the likes of Rais Yatim influenced the decision making process?

Yes, DAP leaders should have defended the decision to appoint Wan Hamidi as Bernama CEO.

It makes me wonder whether DAP really appreciate people like Wan Hamidi.

Really, if I'm a DAP leader, I would appreciate the guy.

Well, it's all just too bad for him.

Idealists always get the lousy end of the stick.