The next best thing for Pakatan - capturing Johor

Just now someone asked me via WhatsApp whether Pakatan still have any chance at all.

This is my reply,

-  Not impossible but it will be an upset if opposition wins. They need to totally overwhelm BN in all the states in the West coast to do that. Pakatan is very weak in the east coast and Sabah Sarawak.

Well, the chances of Pakatan to "totally overwhelm" BN in the West coast are actually rather slim, if you asked me.

They may win quite a lot of seats and even be dominant in Penang, Selangor or even Kedah, but that most likely will not be good enough.

That, unless something spectacularly incredible happen in the East coast and Sabah.

So, really, despite me not yet being on the ground, I can calculate that the odds are against a Pakatan's victory.

Nonetheless, I'm of the opinion that the next best thing Pakatan could achieve is to capture Johor, the birthplace of Umno.

Seriously, I don't think Umno will ever recover if Johor falls.

If I'm a Pakatan strategist, I would throw all I have into the fight in Johor.

Further more, looking at the BN's preparations for GE14 in Johor so far, I don't think it will do any better than in 2013.

If Pakatan pushes hard enough, I think an upset could be possible.

Still, the chances of this happening are just about 35 per cent, at most. 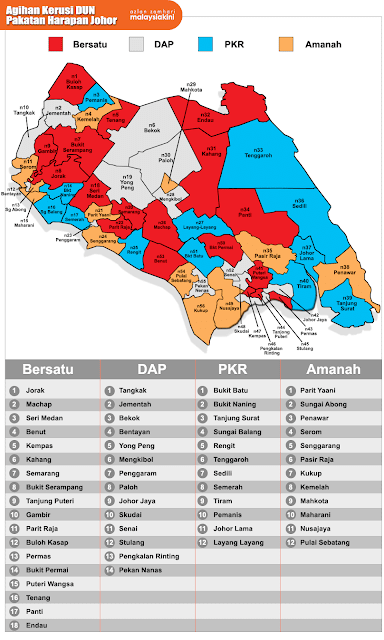 Pakatan parties, with the exception of DAP simply do not have the proper machinery or even enough credible candidates in Johor.

This is especially so in the case of Pribumi, which will contest the most number of seats in Johor from among the Pakatan component parties.

Most are ex-Umno people who are no longer in  mainstream politics.

Therefore, I think Pakatan would have better chance if Amanah lead the charge instead of Pribumi, especially in trying to break the Umno's stranglehold on the Johorean Malays vote bank, which remains solid till the last general election in 2013.

But that's just me and my thoughts.

So, yes, if I'm a Pakatan supporter I would not despair if the opposition coalition losses GE14 provided that it wins in Johor.

Imagine this, Pakatan controlling the three richest states in the country - Selangor, Penang and Johor.

Okay, they may also capture Kedah and Perak too.

For one thing, losing Johor will at least force Umno to do something drastic.

It can't remains the way it is now after losing its birth place and once strongest fortress.

It has to change for the better.

All the shits within it must go.

They have to get rid of the ugly faces who caused Umno to be hated so much by so many people that they even lose Johor on top of everything else.

I will only be able to go on the ground just before nomination day.

Quite frustrating, actually, being forced to remain cooped up in office at a time like this.